Zelda Wiki
Register
Don't have an account?
Sign In
Advertisement
in: Items, Boots, Items in The Adventure of Link,
and 3 more

This article is about the item in The Adventure of Link. For other uses, see Boot (Disambiguation). 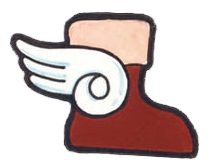 Hover Boots
The Boots are an item in The Adventure of Link.[1][note 1]

The Boots can be found in the Maze Island Palace. They allow Link to walk over certain bodies of water in the overworld,[4] which enables him to reach the next dungeon, the Palace on the Sea. 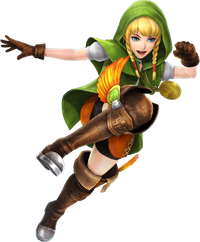 In Hyrule Warriors, the Boots are a class of Weapon used by Linkle, which are exclusive to the Link's Awakening Pack DLC in Hyrule Warriors and Hyrule Warriors Legends. They can be unlocked as Rewards in certain Battles on the Koholint Island Map in Adventure Mode in Hyrule Warriors: Definitive Edition.[which?] They are associated with Lightning. The Boots allow Linkle to perform several aerial kicks and summon Cuccos to support her in battle.

The default Boots are the Winged Boots. These Boots have an iron sole plating similarly to the Iron Boots of Ocarina of Time, with the addition of wings resembling Golden Feathers.

The second form of the Boots are the Roc Boots. These Boots have an identical appearance to the Iron Boots of Twilight Princess, with the addition of two blue feathers on either side resembling the Roc's Feather from Four Swords Adventures.

The third form of the Boots are the Pegasus Boots. These plated boots have white wings and a bright red coloration, similarly to their namesake.

Linkle calls down two Cuccos on each side of her and then starts charging her running speed. She then charges at her enemies, knocking them back while lapping from Cucco to Cucoo at her sides as the Cuccos follow at the same pace as her. Linkle ends the attack by making a jump cheer.

Upon activation, Linkle does a few stretch squats to warm up her legs and then burst out with energy, yelling "BANG!" When deactivating her Force Spirit on her enemies, Linkle gets ready to attack while her Boots spark with power. She then rapidly kicks her enemies before ending the attack with a round-house kick. When her Focus Spirit runs out, Linkle gets ready in a one-leg stance and then performs a double cart-wheel flip while two Cuccos fly down next to her, landing with them. She then stamps the ground while bursting with Lightning energy and yells "CUCOO!"

Boots in The Legend of Zelda series
Community content is available under GNU Free Documentation License unless otherwise noted.
Advertisement