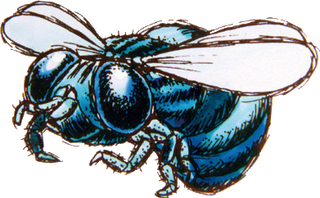 Captain N: The Game Master
The Wand of Gamelon

50
Boons are recurring Enemies in The Legend of Zelda series.[1][note 1] They appear as giant flies.[3]

Boons dwell in Eastern Hyrule, often found in plains and swamp areas and on Maze Island. They buzz around erratically, carrying Rocks that they will attempt to drop onto Link. They will also crash into him when flying low enough. To defeat them, Link must use the Jump Thrust or a well timed hit with the Sword. They are not particularly strong, but they are bothersome, especially when combined with other enemies such as Tektites.

Boons appear in the "Once Upon a Time Machine" episode of Captain N: The Game Master. While Link, Princess Zelda, Kevin, and Princess Lana are having a picnic in Hyrule, a swarm of giant Boons suddenly appear.[4] Link and Kevin easily dispose of a few of them; however, the Boons prove to be a major annoyance to the heroes since one of them takes Link's Sword, another two take the picnic cake, and their presence eventually lead to Kevin's Zapper and Power Pad getting stolen by Count Gruemon.

Boons also appear in The Wand of Gamelon.