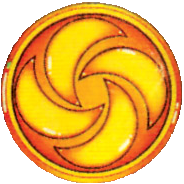 Defeating enemies
Burning enemies
The Bombos Medallion is a recurring Item in The Legend of Zelda series.[1]

In A Link to the Past, the Bombos Medallion can be found in the Desert of Mystery, high upon a cliff that can only be reached by traveling to the Dark World and using the Magic Mirror near the swamp. It is obtained via a green tablet which can only be read with the Book of Mudora. The spell is cast once the Master Sword is raised,[2] with the tablet breaking afterwards. The Medallion then falls from the sky.

With an enchanted Spin Attack, Link sends out a ring of fire followed by a series of small explosions in all directions.[3] This causes all enemies to become inflamed, as if they have been struck with the Fire Rod. This is the only Medallion not required to progress through the game.

The Fairy Queen can cast Bombos without having to use the Bombos Medallion, as shown in the Hyrule Castle stage when a horde of Soldier attempt to ambush her and the Links.