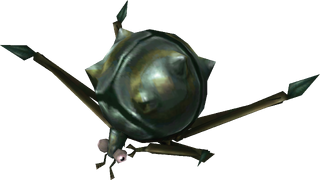 Bomblings are enemies and items in Twilight Princess.[1]

Bomblings appear as enemies in the Forest Temple. They will crouch when approached and, if not picked up or attacked, will start attacking Link. If startled, they will self-destruct after a short amount of time.

Bomblings are used during the Forest Temple as Bomb substitutes. They can be used to blow up rocks and defeat Deku Likes. They are mostly used along with the Gale Boomerang, which can move them to faraway areas. The Temple's boss, Diababa, must be also defeated with the aid of Bomblings.

According to Chudley, Bomblings are popular as pets among the women of the Castle Town.[2]

After completing the Lakebed Temple, Link will receive a letter from Barnes indicating that he has stocked up on Bomblings.

When used, Bomblings will run in a straight line until they have contact with another object, at which point they will explode.[3] If they are near an enemy, they will follow it. 10 Bomblings can be held in each Bomb Bag until Link receives an upgrade, which allows him to hold 20 Bomblings per bag. They can also be used along the Bow to create Bomb Arrows.

Unlike standard Bombs and Water Bombs, Bomblings are entirely optional.