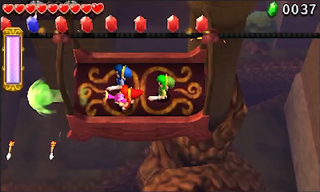 Hinox Bros
Bomb Storage is a Level in Tri Force Heroes.[name reference needed] It is the second Level in the Fortress area.

The Level takes place on the walls of giant castle towering high up in the air, filled with many traps and obstacles. As its name implies, it is a storage hold of Bombs, although this only becomes obvious once the Links reach the Level's bosses, the Hinox Bros, who actively throw Bombs during their fight. One of the Level's usable items includes Bombs as well, and are used to solve a variety of puzzles.

In Stage 1, the Links appear in a corner section. A pair of Gust Jars and Bombs are immediately provided for use. To cross the area, the Links must cross over the large gap by propelling each other across using the Gust Jar. Two Links are propelled over the first gap to a pair of Switches, which creates a bridge for the third Link. The heroes then notice a cracked window within a balcony. A Bomb Flower growing nearby must be propelled with the Gust Jar towards it, which will shatter the glass and reveal a switch. Using the same method, the switch is activated and lowers the bridge to the next area. In this same area, the Links can collect a string of green Rupees floating over the gaps by having one Link propel another across, or simply swinging their swords to collect them from the sides. Over the bridge, another balcony window conceals a switch. As there is no Bomb Flower, one Link must place a Bomb so the other can propel it across. Hitting the switch activates three platforms that form a bridge to the Triforce Gateway. A nearby chest containing 20 Rupees can be reached by throwing one of the Links onto the ledge.

In Stage 2, the area splits into three paths, each with a switch and a large gate barricading the way. The Links must move onto these paths individually, by again propelling themselves across using the Gust Jar, so that the Link with the Bombs is on the furthest left, and the two Links with the Gust Jars are on the middle and right paths. Pressing the switches opens the gate, however the right and middle paths are blocked by cracked blocks, and the leftmost path is blocked by flames. The Links then have to work together to help each other cross their respective paths. The leftmost Link throws a Bomb over to the middle path, so that it may demolish the block. He must then throw another one, so the Link in the middle can throw it to the right side to blast its block. The middle Link can then help the leftmost Link by using the Gust Jar to blow out the flames.

The Links walk down their respective paths, while fighting Hardhat Beetles along the way. Eventually the middle and right paths combine, reuniting the two Links. One of them can be propelled over to the left path. This path will lead to a raised platform with a switch nearby. The Link with Bombs must throw a Bomb over the gap to hit it. This becomes easier to achieve by forming a Totem with a second Link. Hitting this switch activates a moving platform to the right path. Two of the Links must ride this platform ahead, so that they can form a Totem to reach a switch that activates another moving platform for the other Link. Once all three Links are reunited, they can form a Totem of three to hit a switch that lowers a bridge to the Triforce Gateway.

Stage 3 features an aerial lift attached to an overhead cable, which the Links must operate by propelling it forward with the Gust Jars. Rupees can be found along the cable, which can be grabbed by forming a Totem of three and carefully throwing the top Link at them. Trap arrows shot from the walls will fly by as they move forward. The lift brings them to a tower with an opening and closing switch, which can be hit by throwing a Bomb over. This activates a tower with spinning shields holding another switch. The Links must then form a three-Link Totem and throw another Bomb into this tower to activate its switch, lowering the bridge to the Triforce Gateway. On the other side is a lever switch, which can be struck to immediately move the lift from one side to the other should any of the Links get stuck.

Stage 4 is where the Hinox Bros are fought, who throw Bombs at the Links' direction from gated balconies.

Bomb Storage includes the following Drablands Challenges: "Win without using a sword!", "Transport the orb quickly!", and "Don't fall at all!".

"Win without using a sword!"