Zelda Wiki
Register
Don't have an account?
Sign In
Advertisement
in: Characters with Missing Genders, Hylians, Terminans,
and 3 more 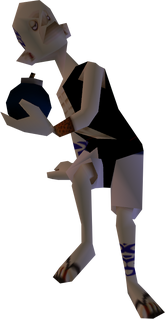 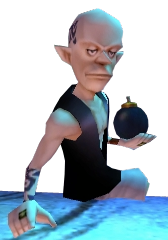 The Bomb Shop Owner runs the Clock Town Bomb Shop in West Clock Town, along with his mother, the Old Lady from Bomb Shop. He sells Bomb Bags and Bombs to customers and allows the Goron salesman to sell his Powder Kegs in the store.[2] As he often mentions the fireworks show at the Carnival of Time, it is likely that the Bomb Shop provides them as well.[3]

The Bomb Shop Owner often calls his mother "Mommy,"[4] and shows concern for her when she returns from procuring Big Bomb Bags by way of North Clock Town,[5] which he says has a bad reputation.[6] If Link does not intervene and his mother is robbed by Sakon, the Bomb Shop Owner will decide to do the errand himself from then on, rather than risk his mother's safety.[7]

Since his mother says that she and his father used to dream of selling Big Bomb Bags, it is probable that he learned the Bomb-making trade from his father.[8] He and his mother also seem to be inventors of sorts, planning a trip to the moon using Bomb-powered flight and owning a Mask filled with gunpowder,[9][10] which they may have created themselves.

The Bomb Shop Owner is last seen standing outside his shop with his mother during the ending credits.