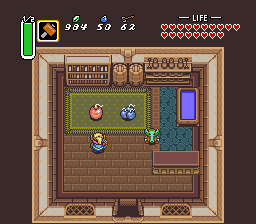 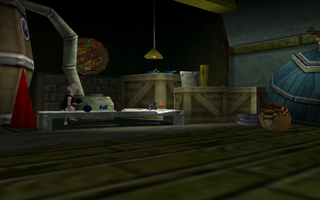 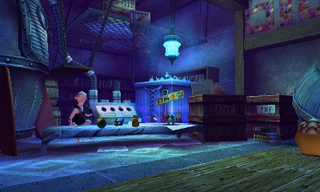 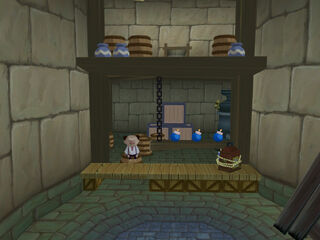 Bomb Shop are recurring shops that specializes in explosives in The Legend of Zelda series.[1]

Bomb Shops cater to customers that use Bombs and other Bomb-related goods. Their wares generally include Bombs, Bomb Bags of different sizes and other specialized varieties of explosive, such as the Bombling and Water Bomb. They usually sell bushels of Bombs in different quantities. They are commonly located in towns and villages across the overworld.

In A Link to the Past, the Bomb Shop is located in the Dark World. It is situated exactly where Link's House appears in the Light World. The Shop is kept by the Bomb Shopkeeper. At first, he sells only regular Bombs, but after Link completes the Ice Palace, Misery Mire, and reunites the Dwarven Swordsmiths, the Shopkeeper will sell a special Super Bomb that allows Link to access the Mysterious Pond at the base of the Pyramid of Power, where the Silver Arrows and Golden Sword can be acquired.

In Ocarina of Time, the Goron Shop in Goron City sells Bombs in many different quantities. There is also a Bombchu Shop in the Back Alley of Hyrule Castle Town.

In Majora's Mask, the Bomb Shop is located in West Clock Town. It is run by the Bomb Shop Owner and his mother, who originally ran it with her late husband.[2] The Shop sells Bombs as well as Bombchu. After saving the Old Lady in North Clock Town from being robbed by a thief, the Shop will sell a Big Bomb Bag.[3] There is a second Bomb Shop located in the Goron Village, known as the Goron Powder Keg Shop, that sells Powder Kegs for 100 Rupees each. Link must pass the certification test before he may purchase any Powder Kegs, however. A Goron in the Bomb Shop in Clock Town also sells Kegs, at half the price the Powder Keg Shop sells them for.[4] However, Link must have already passed the test to be able to purchase Powder Kegs there.

Unique decorations inside the Bomb Shop include a large model rocket, a giant model Bomb, and notes and schematics for a planned trip to the Moon using Bomb-powered flight.[5] The owner often recommends the fireworks show at the Carnival of Time, which may indicate that the Bomb Shop provides them.[6]

In The Wind Waker, the Bomb Shop is located on the southern part of Windfall Island. It is run by Bomb-Master Cannon, the only Bomb maker left in the entire Great Sea.[7] At first, Master Cannon's Bombs are far too expensive for Link to afford, and he cannot obtain them in the early part of the game.[8] However, after Tetra and her crew come in and steal his Bombs, he lowers the prices.[9]

There is a total of 50 Rupees stored in the five barrels behind the counter—10 Green Rupees in each. Link can reach them and break them while Bomb-Master Cannon is still tied up, i.e. while Tetra's Ship is anchored at Windfall Island.

In A Link Between Worlds, the Bomb Flower Store is located in Lorule, south of Thieves' Town. It is owned by the Bomb-Shop Man. The store's only ware is the Big Bomb Flower, which grows in a garden outside of the store. Link can purchase the Big Bomb Flower for 200 Rupees in order to use it to destroy several large boulders around Lorule, including the boulder barricading the entrance to the Swamp Palace.