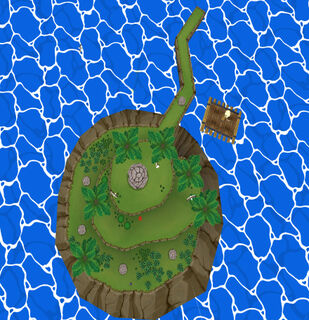 Bomb Island is a bomb-shaped island in The Wind Waker.[1]

Bomb Island has a secret cave hidden underneath a giant rock. Once the obstacle is blown up, Link enters the grotto and finds a dungeon-like room inside. There are plenty of Magtails as well as floor switches, so Link must stun these creatures and use their bodies as weights to keep the switches down. There is one switch to the left upon entering which must be weighed down using a Magtail before it wakes up. Once across the new path that was opened, there will be two switches to press: one surrounded in fire and another surrounded with fire but behind yet another beam of fire. Like before, the Magtails must be knocked out and placed on the first switch, while the second one requires good accuracy with throwing objects. Once both switches are pressed, the last beam of fire is extinguished and shows a chest containing a Piece of Heart.

A second Piece of Heart can be unveiled from the waters surrounding the island after finding and opening a Treasure Chart found in Earth Temple. This island is also one of the seven destinations of the Ghost Ship. One of the Traveling Merchants is also found walking on the island's grass.

Outside the island, Link finds a small lineup of jars containing Rupees. However, reaching them is difficult due to thorned vines that block the way. Also, near the island is a submarine where Link can find an empty Bottle after defeating some enemies.