Zelda Wiki
Register
Don't have an account?
Sign In
Advertisement
in: Objects, Explosives, Objects in The Wind Waker,
and 9 more 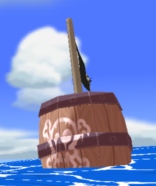 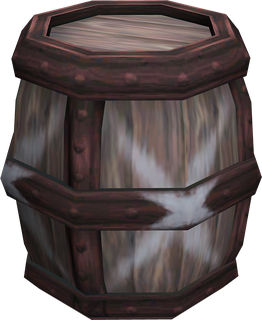 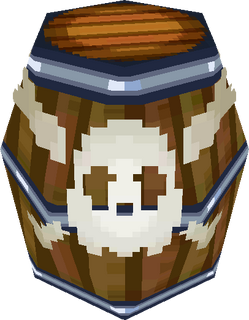 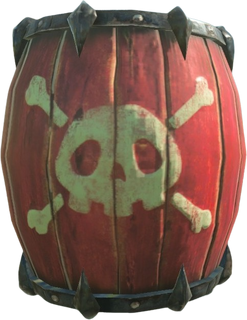 Bomb Barrels appear floating on the Great Sea near the Forsaken Fortress in The Wind Waker. Similar to Bombs, though functionally similar in purpose to a maritime mine, Bomb Barrels surface then flash red with increasing rapidness as its fuse burns out, giving an indication as to when the Bomb Barrel is about to explode. If in close proximity of a Bomb Barrel when it detonates, Link will be thrown off his boat. In The Wind Waker HD, he is simply damaged instead. Direct collision with a Bomb Barrel will also cause it to explode.

Bomb Barrels appear in an outside room of the Goron Mines in Twilight Princess. In this room, several Bulblin archers will shoot at Link with fire-tipped Arrows, which may detonate the Bomb Barrels scattered across the rooms. Bomb Barrels also appear in the Hidden Village, which Link can use to shoot down the Bulblins around the Village.

Bomb Barrels appear as obstacles in the World of the Ocean King in Phantom Hourglass. They can be detonated from a distance using the Cannon.

Bomb Barrels can be found inside a cave during the Three Trials in the Sand Realm in Spirit Tracks. They must be use in order to damage the Rocktite. Exploding a Bomb Barrel with the Cannon while the Rocktite is nearby forces its eye open, leaving it vulnerable to direct attacks.

Bomb Barrels appear in certain stages in Link's Crossbow Training, such as in the Hidden Village Bulblin shootout in Stage 5. These Bomb Barrels can be used to Link's advantage, as detonating them will defeat any nearby Bulblin.

Bomb Stacks appear in various Stages in Nintendo Land's Battle Quest. They can be detonated with a strike from an Arrow. When detonated, Bomb Stacks damage anything in their blast radius.

Bomb Stacks also appear as a Prize in the Nintendo Land Plaza. When interacted with, they explode before being replaced. The explosions from the Prize do not cause any damage.

Bomb Barrels are interactable hazards that can be detonated by various means, usually attacks from either Warriors or monsters, damaging anything and anyone caught in its blast. When Bomb Barrels in the stage are detonated, any monster caught in the blast with a possible Weak Point Gauge will have it exposed. Unlike Breath of the Wild, they can be blown up with the Remote Bomb Sheikah Rune via the Sheikah Slate.

During the Divine Beast combat segments, Bomb Barrels are the weapon of choice for Moblins.

Bomb Barrels are also integrated into Impa's Special Attack. If she has either none or two Signs absorbed, Impa uses just one that has been marked with a Sign, absorbing it upon the conclusion of the detonation. If she has three active Signs, she will use a whole stack of Bomb Barrels, costing her her entire Sign stock, though she gains a Sign from the conclusion of the detonation.

In the Pulse of the Ancients Downloadable Content pack, Black Moblins and Silver Moblins carry them on containers and throw them at enemies that get too close or from a distance. Unlike the Bomb Barrels in Breath of the Wild and any point in the game, they are not damaged by their own Barrels, save for exploiting a Weak Point Gauge involving the Remote Bomb Sheikah Rune.

Explosives in The Legend of Zelda series
Community content is available under GNU Free Documentation License unless otherwise noted.
Advertisement