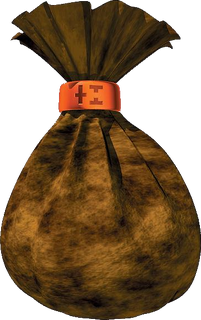 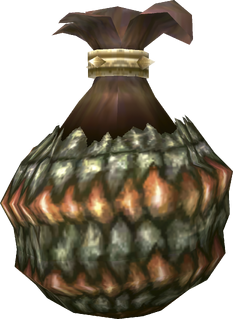 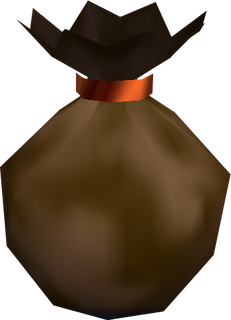 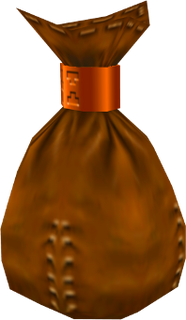 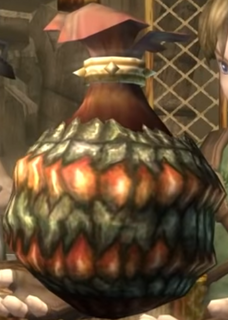 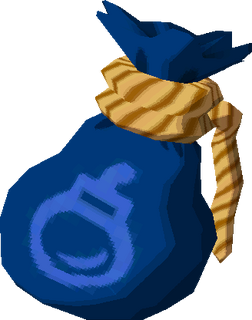 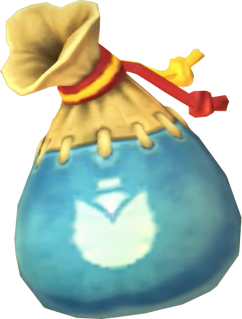 Holding Bombs
Bomb Bags are recurring Items in The Legend of Zelda series.[3][4]

Bomb Bags are satchels in which Link can carry Bombs. They are often obtained as a Dungeon Items that give Link access to Bombs and allow him to continue his quest,[5] though in some cases, the Bombs themselves are treated as Link's essential Item,[6] while the Bomb Bag they come with is either shown in his inventory or merely alluded to.[7]

Upgrades to the Bomb Bag, which increase the amount of Bombs they can carry, are quite commonplace across Link's adventures. Most games featuring the Item also have several subsequent Bomb Bags for Link to discover, which act as upgrades to the initial Bomb Bag and can usually be collected in any order.[8][9]

In earlier games, such as The Legend of Zelda, A Link to the Past and Link's Awakening, Bombs are available to be found or purchased without the need for a Bomb Bag, as they are not tied to Link's progression. Link's Bomb capacity can still be increased by the blessings of other characters, such as the Old Man, Venus, and the Mad Batter, respectively.[10]

In Ocarina of Time, the Bomb Bag is the Dungeon Item of Dodongo's Cavern. Two upgrades, called the Big Bomb Bag and the Biggest Bomb Bag, can be obtained in any order.

The Bomb Bag in Majora's Mask can be purchased from the Bomb Shop in West Clock Town for 50 Rupees. If Link saves the Old Lady from Sakon's attack during the night of the First Day, then the Big Bomb Bag will replace the regular Bomb Bag in the Bomb Shop's stock; otherwise, it will appear for sale at the Curiosity Shop on the night of the Final Day for a higher price. The Big Bomb Bag can be purchased without owning the regular Bomb Bag first.

In both Oracle of Seasons and Oracle of Ages, the existence of a Bomb Bag is only alluded to when acquiring an upgrade to Link's Bomb capacity.

In Oracle of Seasons, after obtaining Bombs in the Gnarled Root Dungeon, Link can purchase a Big Bomb Bag at the Subrosia Market.[13] Despite the Item's name, the upgrade is represented by a red Bomb which immediately explodes all around Link, magically granting an increase in the number of Bombs he can carry.

Another Bomb Bag upgrade can be obtained through the use of Linking Secrets. If Link has defeated Onox and begun a Linked Game of Oracle of Ages, he will eventually meet a young girl at the South Shore who asks him to pass on her "lucky" secret to an unlucky person in Holodrum,[14] hinting that she refers to a Piratian.[15] Back in Oracle of Seasons, if Link tells this Secret to one of the remaining Piratians in the House of Pirates, he will be rewarded with an increased Bomb Bag capacity—but only if he possesses the "lucky" number of 777 Ore Chunks.[16] If Link's adventure in Oracle of Seasons is the Linked Game instead, he can meet a friendly Moblin in the Great Moblin's Ruined Keep who tells him a Secret related to the Tokay people.[17][18] Passing on this Linking Secret to the Wild Tokay Museum curator in Oracle of Ages will inspire him to revive the Wild Tokay ceremony.[19] For completing the Mini-Game, he rewards Link with a Bomb Bag capacity upgrade and another Secret to access the upgrade in Holodrum.[20] Back in Oracle of Seasons, Link can tell this Secret to Farore to receive the upgrade in that game.

In Oracle of Ages, Link first gains Bombs as his reward for bringing Mystical Seeds to Queen Ambi.[21] He is later granted an increase in Bomb-carrying capacity by a Fairy met on Talus Peaks, who also fills his Bomb Bag.[22] However, it is unclear if this refers to an already-existing Bomb Bag, or one given to him by the Fairy.

In The Wind Waker, no Bomb Bag is mentioned or shown on the Collection Screen when Link acquires Bombs by completing Niko's challenge below the deck of Tetra's Ship. However, when receiving capacity upgrades from two of the Great Fairies, the upgrades are represented onscreen by Link holding Bomb Bags above his head. The upgrades can be obtained in any order, with the second upgrade appearing as a larger Bomb Bag.

In The Minish Cap, a Bomb Bag is given to Link by the Forest Picori Belari after completing Deepwood Shrine, as a means to clear the Rocks blocking the path back to Hyrule Town.[23][24] Three upgrades to the Bomb Bag, all referred to as Big Bomb Bags,[25] can be obtained in any order.

In Twilight Princess, instead of Link upgrading his Bomb Bag to be larger and larger, he can collect multiple Bomb Bags in his inventory. Each Bomb Bag can only hold one type of Bomb at a time, so collecting extra Bags gives Link not just extra carrying capacity, but the ability to hold more varieties of explosives as well.

In Phantom Hourglass, Link's first Bomb Bag is obtained along with the Bombs in the Temple of Wind.[26] This Bomb Bag does not appear in the Collection screen, instead being represented by simply a Bomb, until he obtains either of the Bomb Bag upgrades.

With Bombs being optional Items in Spirit Tracks, Link can gain access to the explosives by acquiring any of the three Bomb Bags found throughout Hyrule. The two subsequent Bomb Bags will then act as upgrades, called the Medium Bomb Bag and the Big Bomb Bag in the order they are obtained.

In Skyward Sword, there are no traditional Bombs at all. After acquiring the Bomb Bag in the Earth Temple, Link is able to store Bomb Flowers and use them at will, giving him the same abilities as Bombs. In addition, Small Bomb Bag are in unlimited supply; after completing the Earth Temple, Link can purchase as many Small Bomb Bags as he can carry, though only those he stores in the Pouch will contribute to his Bomb capacity.

Each Small Bomb Bag can be upgraded at the Scrap Shop to store up to 15 extra Bombs. With up to eight spots in the Pouch, this gives Link a maximum capacity of 130 Bombs, provided that he equips no other Items.