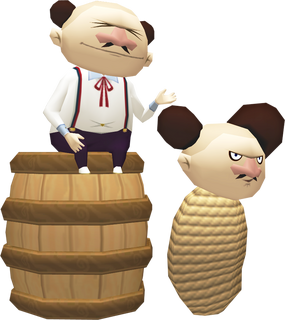 Bomb-Master Cannon is a character in The Wind Waker.[citation needed]

Cannon is the owner of the Bomb Shop on Windfall Island. If Link visits his shop early in the game, he acts rudely and disrespectfully towards the young hero, claiming to be the last maker of Bombs in the world and refusing to sell them to those he disapproves of.[2][3] As a result, he sells his products at ludicrous prices, with the lowest being 10,000 Rupees for 10 Bombs.

During their quest to obtain Nayru's Pearl, Tetra's pirates pay a visit to Cannon, tying him up and gagging him in order to steal his Bombs, which they plan to use to break into Jabun's cave. However, Link manages to sneak onto their ship and take the Bombs for himself with Niko's help. After being robbed by the pirates, Cannon goes back to running his shop, whilst adopting a kinder and more generous personality as well as more affordable prices on his merchandise.[4]