"A skeletal arm that keeps moving even after it's severed from its body. It's kind of gross to strap it to your back, but it'll do in a pinch. It's old and fragile so it's quick to break."
— Hyrule Compendium

The Bokoblin Arm is an item from The Legend of Zelda: Breath of the Wild. It can be obtained by Link throughout Hyrule from defeated Stalkoblins or when they crumble from being attacked. Link can equip and use it as a weapon with a base attack strength of 5. However it is a fragile weapon and will eventually break. Non-dismembered Stalkoblins can also pick up a Bokoblin arm on the ground and wield it as a weapon as can living Bokoblins, Moblins, and Lizalfos along with Stalmoblin and Stalizalfos. The arm can also be used to throw back small rocks hurled by enemies dealing damage to them instead. 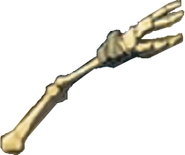 Render of a Bokoblin Arm
Add a photo to this gallery

Retrieved from "https://zelda.fandom.com/wiki/Bokoblin_Arm?oldid=544223"
Community content is available under CC-BY-SA unless otherwise noted.