Boko Sticks are items from The Legend of Zelda: The Wind Waker. These sticks are the hardened stems of defeated Boko Babas. While similar to Deku Sticks, Boko Sticks are notably different in that they can not break, do not burn away if left lit for too long, and lack the Deku Stick's portability (as they cannot be stored in Link's inventory). They are commonly seen in the hands of Bokoblins, are dropped by defeated Boko Babas, and are sometimes stored in pots. Link cannot carry them between rooms, and they are not available for use from the inventory screen.

When lit on fire, Boko Sticks can be used to provide light in dark areas, to light torches, and to burn certain objects. Link can also use them as weak weapons, either by striking enemies directly or by throwing a Boko Stick from afar. During Link's first journey to the Forsaken Fortress, Boko Sticks are the only weapons available while his Hero's Sword is stuck high up on a ledge in the fortress.

Interestingly, if there is a Boko Stick lying on the ground in close vicinity to a disarmed Darknut, the Darknut will pick up the Boko Stick and wield it as a weapon. 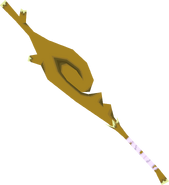 A Boko Stick
Add a photo to this gallery

Retrieved from "https://zelda.fandom.com/wiki/Boko_Stick?oldid=534487"
Community content is available under CC-BY-SA unless otherwise noted.