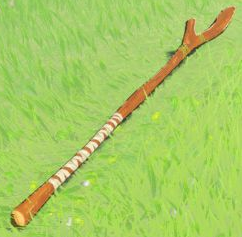 12
Boko Spears are recurring Items in The Legend of Zelda series.[1][2]

Boko Spears are Weapons that can commonly found in Hyrule Field and West Necluda. They're used primarily by regular Bokoblins in these areas. Carved from tree branches, these spears are also used by Bokoblins to skewer and cook food.[1] The Hyrule Compendium recommends throwing them if they're close to breaking.[1]

Being made of wood, Boko Spears will float on water if they're dropped. They will also burn if they're exposed to a Scorching Climate or Fire, which is a tactic used by Bokoblins near Campfires.

Boko Spears are set to reappear in Sequel to Breath of the Wild, once again being wielded by Bokoblins and Blue Bokoblins in battle.

Boko Spears reappear in Hyrule Warriors: Age of Calamity, once again being wielded by Bokoblins, starting with The Battle of Hyrule Field. A Boko Spear can be obtained for use by Link, as well as upgraded and enhanced, but is outclassed by other weapons.