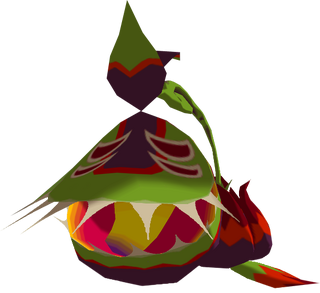 Boko Babas are mainly found in the Forest Haven and in the Forbidden Woods. They also appear in some holes on other islands and on some floors of the Savage Labyrinth. They have an idle animation where they occasionally drool a purple liquid. They have three methods of attack; a surprise attack when it first springs out of its bud, a bite or headbutt attack, and its eating attack, which cannot be blocked. The latter can be anticipated when it licks its lips. If grabbed, Link will be vigorously chewed up, dealing up to one and a quarter heart of damage, and then be spat out afterwards. While Link is being chewed up, purple drool flies out from the Boko Baba's mouth, and sometimes Link's head clips through the Boko Baba's head; this is only seen if Link is facing towards the screen while being chewed up.

To defeat a Boko Baba, Link must attack it until it straightens its neck following two Sword slashes, then sever its head. If Link moves behind a Boko Baba after hitting it with the sword, its neck straightened or not, or if he moves far enough away from one, it will hide back into its bud and perform another surprise attack after a few seconds with the former instance and when Link approaches again in the latter instance. Alternatively, hitting it with the Hookshot or the Deku Leaf straighten up its neck immediately. The Boomerang can defeat them in one hit. The Skull Hammer can also be used to defeat them in one hit; doing so will cause an alternate death animation where the affected Boko Baba's head will be squashed. When defeated, depending on the Boko Baba, they may leave a Baba Bud behind. They also leave behind Boko Sticks, and almost always, a Boko Baba Seed, which can alternatively be stolen with the Grappling Hook.