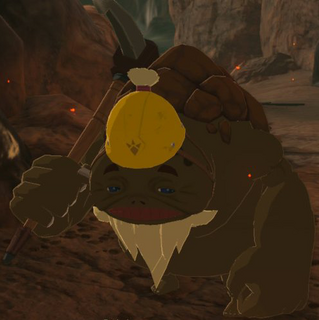 Bohrin is a character in Breath of the Wild.[1]

Bohrin is an elderly Goron who works as a miner at the Southern Mine in the Eldin Canyon. In the past, he was young and strong, but even though he's older now, he still has a lot of fight.[2] Bohrin works the night shift; during the day he can be found asleep beneath a tarp while the other Gorons work, before waking up at night and working the entire shift alone.[3] By the following morning, he is much too tired and goes straight back to sleep.[4]

Bohrin may be spoken to while he is working. When asked, he'll explain that the ore from the Southern Mine is sold, which Goron City profits from.[5] He explains that the Gorons used to mine at the Death Mountain Summit, until the Divine Beast Vah Rudania appeared and made the area too dangerous.[6] As a result, the Gorons now work at the Southern Mine.[7] He also gives directions to Goron City, and warns Link that the road ahead is dangerous.[8]