Not to be confused with Bullbo, the giant boar enemy introduced in Twilight Princess. 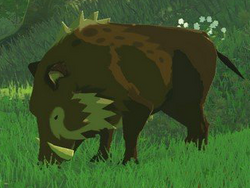 A Woodland Boar from Breath of the Wild

Breath of the Wild features Woodland Boars and Red-Tusked Boars. They are commonly found in Forests. When encountered, they will either flee from Link or charge at him in defense. When defeated, Woodland Boars drop Raw Meat, while Red-Tusked Boars drop Raw Prime Meat, which can be eaten or cooked to restore Link's Life Gauge. Bokoblins will sometimes chase after Boars that wander near them, occasionally killing and eating them.

In The Faces of Evil and The Wand of Gamelon, Boars appear as unnamed enemies. They are short, fast enemies that run in a linear path and will fall to a single sword hit. However, due to their small size, striking one may become difficult if Link or Zelda are even slightly on an incline. In The Faces of Evil, they can be found in the Harlequin Bazaar. In The Wand of Gamelon, they inhabit Aru Ainu.