The Blue Stalfos is the mini-boss of the Ancient Tomb, the eighth and final dungeon in The Legend of Zelda: Oracle of Ages. The Blue Stalfos is a powerful Stalfos that bears a clear resemblance to the Grim Reaper, one of the more popular personifications of Death, being dressed in a hooded robe and wielding a scythe in battle. The Blue Stalfos' body is intangible and all but immune to physical harm.

Even though the Blue Stalfos cannot be injured by any item in Link's arsenal, he does not actively hunt him and mostly chooses to keep his distance, often swinging his scythe at him if he manages to get too close. If Link is keeping his distance as well, the Blue Stalfos will prepare one of his two magic attacks. It is not possible to tell which magic he is charging up until it has actually been released. The twirling bolt will split into six smaller bolts if Link touches it or attacks it, likely scoring a hit in the progress; while the other, which appears as a smooth sphere, will turn whoever it hits into a helpless infant, even the Blue Stalfos himself.

The key to defeating Blue Stalfos is to turn his own magic against him; namely, the "time-turning" sphere. If Link hits the sphere with his sword so that it reflects back to the Stalfos, it will turn the enemy into an "infant" Stalfos, which resembles a skull with bat-like wings, that features no defense whatsoever. 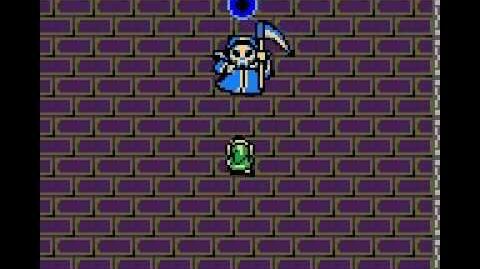 Retrieved from "https://zelda.fandom.com/wiki/Blue_Stalfos?oldid=465836"
Community content is available under CC-BY-SA unless otherwise noted.