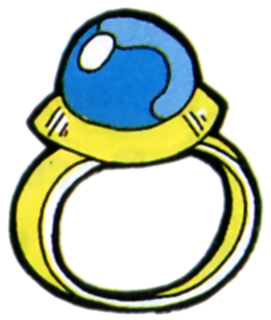 The Legend of Zelda
Oracle of Seasons
Oracle of Ages

Blue Bracelet
Green Ring
Red Ring
The Blue Ring is a recurring Item in The Legend of Zelda series.[1][2][3]

In The Legend of Zelda, Link can equip the Blue Ring to take half the amount of damage he would normally.[4] In the First Quest, it can be purchased for 250 Rupees in a Shop within a Cave accessed through a staircase hidden beneath an Armos. In the Second Quest, it is sold for 250 Rupees in a different location in the northeastern portion of Hyrule. While Link has the Blue Ring equipped, his tunic is white. Certain characters, items, and enemies share colors with Link's tunic and will appear white while Link has the Blue Ring equipped, such as Princess Zelda's dress, the Arrow, and the whiskers of a Pols Voice. The Blue Ring can be replaced with the Red Ring found in Level-9, which reduces the amount of damage Link takes to a quarter of what he normally would.

In Oracle of Seasons, the Blue Ring can be transferred from Oracle of Ages by talking to either the Blue or Red Snake.

In Oracle of Ages, the Blue Ring can be found under a statue on the Sea of No Return, requiring the Power Glove to obtain it. The Magic Ring can be appraised at Vasu Jewelers for 20 Rupees. When worn, it halves damage taken by Link.[2]

In The Shadow Prince, the Blue Ring makes another appearance, although its use is completely different from the one seen in the games and actually leads to a Game Over if Link receives this item. The young hero can obtain the Blue Ring from Charles of Moria if he decides to stay at North Castle and chooses to fight Charles after he hears him talking to some monsters. Link drops down from the tree and demands that Charles stop his evil magic, challenging him to a fight. Confused, the Morian knight tells the young hero that he just wants to be his friend, and gives him a Blue Ring as part of a Morian custom of exchanging gifts.

Later on in the book, after Link finds out that Charles is actually Ganon in disguise, he follows the false Morian knight into the woods but is promptly surrounded by a gang of Moblins. Link confidently reaches into his pocket and pulls out the blue ring that Charles gave him, which causes for the knight and the Moblins to take a step back. The young hero then reminds Charles that it was the magic ring that he gave Link as a token of friendship, and Charles begins to look nervous. Link guesses that from the way Charles is reacting that the ring must be powerful, but Charles just mocks him when suddenly blue smoke rises from the ring. This causes the young hero to begin to feel weak and eventually collapses. The page ends with a Game Over as Charles laughs at Link and pokes the young hero's weakened body.

In Hyrule Warriors, the Blue Ring appears as the first tier weapon of Wizzro's Ring weapon type. Like all of the Ring weapons, it is of the Darkness element and enables Wizzro to use and manifest his dark magic into an assortment of attacks.