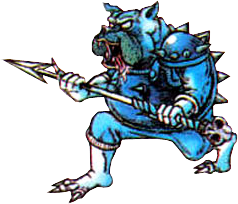 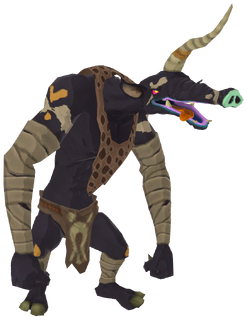 The Legend of Zelda
3
Breath of the Wild
144

The Legend of Zelda
Arrow (1 heart)

Blue Moblins are recurring Enemies in The Legend of Zelda series.[1][name reference needed]

Blue Moblins first appear in The Legend of Zelda, being seen in forest areas like the Lost Woods. They act the same as Moblins, but can withstand more hits.

Reappearing for the first time since the Oracle games, Blue Moblins are found all over Hyrule and are now tall and heavy, similar to the normal Moblins.[2] They are tougher variants of Moblins and often have stronger Moblin Weapons, though they are now outclassed by Black Moblins and Silver Moblins.[3] When defeated, they drop Moblin Horns, Moblin Fangs, and Moblin Guts.

Blue Moblins are set to reappear in Sequel to Breath of the Wild.

Blue Moblins reappear in Hyrule Warriors: Age of Calamity, first seen in The Yiga Clan Attacks!. Like Moblins in this game, they attack with either their fists or weapons like Moblin Spears, Moblin Clubs, and any metal weapons, which can be countered with Stasis, Cryonis, and the Magnesis Shiekah Runes, thus exposing their Weak Point Gauge.

Moblins in The Legend of Zelda series
Community content is available under GNU Free Documentation License unless otherwise noted.
Advertisement