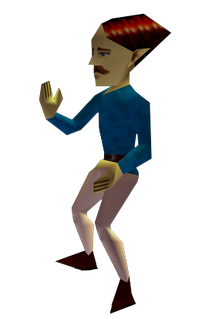 The Blue Juggler is a member of the Twin Jugglers along with his twin brother, the Red Juggler.

In Ocarina of Time, the Blue Juggler is a timid man who is constantly recounting his experiences with oddities and mysteries on Kingdom of Hyrule, only to mocked by the Red Juggler.[4][5]

When Link first visits Hyrule Castle Town, the Blue Juggler tells him that he tried to sneak into the Castle and speak to Princess Zelda.[6] Whilst he made it past the Soldiers, he got stuck in the drain hole due to his size and was caught. [7] As a result, the security was increased and the Red Juggler mocked him.[8]

When Impa and Princess Zelda leave Hyrule Castle on horseback pursued by Ganondorf, the Blue Juggler reveals he was almost kicked by Ganondorf's Steed.[9] This leads to the Red Juggler calling him a coward.[10]

Seven years later, the Blue Juggler has fled to Kakariko Village during Ganondorf's reign and lives in Impa's old house. He saw Dampé's ghost descending into his Grave with the Hookshot in his hand, but was again dismissed and labeled timid by the Red Juggler.[4][5]

When Kakariko village was set fire, the Blue Juggler was among the villagers who helped put out the flames.[11]

When Link clears the Shadow Temple, the Blue Juggler sees him fly out of the temple surrounded by a blue light and tries to tell everyone about it.[12] However the Red Juggler labels this a delusion of his.[13]

In his final appearance, he laments no one has believed him for the past seven years.[14]

In Majora's Mask, the Blue Juggler is a mirthful juggler who get along well with his twin.[15]