"This is a rare, aquatic Chuchu. Known for attaching itself to unaware victims, its gelatinous body will clog your air pipe, literally taking your breath away. It is exceedingly dangerous to allow one of the larger specimens to stick to you for any length of time."
— Fi

Blue ChuChus are recurring enemies in the Legend of Zelda series. They are a variety of the gelatinous ChuChu. In The Legend of Zelda: Breath of the Wild, the basic variant called Chuchu is blue in appearance and drops the basic blue-colored Chuchu Jelly.

The only Blue ChuChu in the game can be found in a chamber in Great Bay Temple. Unlike the other ChuChus found in the game, the Blue ChuChu does not have an item stored inside its body. If it is hit with an Ice Arrow, it becomes a climbable Ice Block, allowing Link to reach a high ledge. 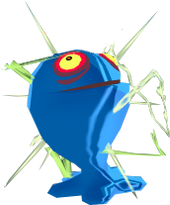 Blue ChuChus are the rarest ChuChus in the game, with a limited number of 23 specimens found scattered throughout the Great Sea. Unlike the other varieties, they are never encountered within dungeons, only appearing on choice islands, either alone or in groups of two or three. Rather than chase Link, they simply move around a set area. However, they are similar Yellow ChuChus in that both emit electricity and must either be stunned with the Boomerang or attacked during the small period of time when the current has died down. When they first pop up, Link can defeat one using only his sword, but he must be do this very quickly as he only has a brief moment before it begins conducting electricity. They also have twice as much health as other ChuChus and turn into a puddle similar to Green ChuChus. Upon being defeated for the first time, a Blue ChuChu will leave behind Blue Chu Jelly, which can be made into a Blue Potion when brought to Doc Bandam. Subsequently, they yield Yellow Rupees upon defeat. Interestingly, if Link performs a Jump Attack toward a spot where a Blue ChuChu will appear (provided that Blue ChuChu has not popped up yet), it will be defeated instantly.

Blue ChuChus appear in the Palace of Winds. In a similar fashion to previous incarnations, they have electricity pulsing through their bodies. The electric current is constant, starting briefly after they become solid, forcing Link to either use ranged weapons in order to stun/defeat them, or strike them quickly after they solidify. A Big Blue ChuChu appears as the mini-boss of the Temple of Droplets.

Blue ChuChus are encountered rarely when compared to common Yellow ChuChus, as appear only on Goron Island, the Temple of Ice, and aboard certain ships. They are, however, only slightly more dangerous than Yellow ChuChus. Though both types of ChuChus emit electricity, the current that pulses through Blue ChuChus never ceases, requiring that they be stunned before a dispatching blow can be delivered. They are also slightly faster than other ChuChus. However, bombs and arrows may be used to defeat them instantly without negating the electric barrier. If Link touches a Blue ChuChu, he will be shocked and the map screen will momentarily become fuzzy and difficult to read.

Blue ChuChus are electrified ChuChus that surprise Link by popping out of the ground when he nears. They are impervious to almost all of Link's normal attacks and can only be damaged by Light Arrows, a Phantom's sword, the Lokomo Sword, the helmets of Helmet ChuChus, and swords pulled from statues with the Whip. When Link touches them, he is electrocuted, causing his map to blur.

Blue ChuChus appear similar to other ChuChus found in the game; however, they are only found underwater. Unlike their land-dwelling cousins, they always appear at their maximum size, but will be destroyed by a single spin. They seem to crawl on the water floor. Like other ChuChus in the game, they sometimes drop Jelly Blobs when defeated.

Retrieved from "https://zelda.fandom.com/wiki/Blue_ChuChu?oldid=520099"
Community content is available under CC-BY-SA unless otherwise noted.