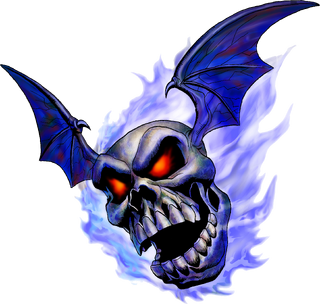 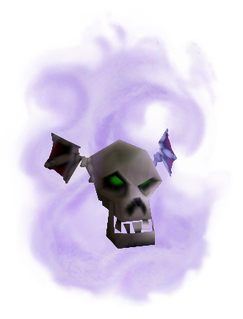 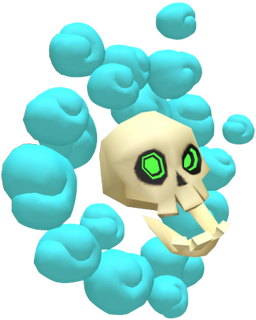 Blue Bubbles are recurring Enemies in The Legend of Zelda series.[1]

As a variant of the Bubble, Blue Bubbles are animated Skulls that appear in the Second Quest of The Legend of Zelda. They can be found in Level 4, Level 5, Level 6, Level 7, Level 8, and Level 9. Like Bubbles, they move in erratic patterns and are invincible to all attacks. When touched, Blue Bubbles do not inflict damage to Link and will instead dispel the curse that disables Link from using his Sword after touching a Red Bubble.[2] Because this is one of the only ways for Link to end a curse from a Red Bubble (other than drinking a Life Potion or visiting a Great Fairy in the Overworld), Blue Bubbles are often found near Red Bubbles.

In Ocarina of Time, Blue Bubbles are animated skulls surrounded by blue fire. They can be found in the Forest Temple, hovering in place in certain rooms. If Link approaches them, they will aggressively fly toward him. Their flames act as a barrier that protects them from most attacks. Link can defend himself with a Shield to extinguish their flame and knock them to the ground.[3] On the ground, they helplessly hop around and attempt to escape Link while vulnerable. If Link places a Bomb near a Blue Bubble, they will be attracted to it, circling around the Bomb until it explodes.

Blue Bubbles in Majora's Mask are animated skulls surrounded by a blue flame. They can be found throughout various places in Termina during the night, such as Termina Field and Ikana. They will aggressively chase after Link if he comes near them, cursing him if they come into contact. If Link becomes cursed, he will be unable to use his Sword for a short period of time. However, the curse can be removed immediately by playing the "Song of Storms". Link can defend himself with a Shield to extinguish their flame and leave them vulnerable.[4]

In The Wind Waker, Blue Bubbles are floating skulls surrounded by curling blue flames. Blue Bubbles fly around at their own leisure, but immediately chase after Link when they spot him, attempting to catch him on their fire. They emit a cackling laughter whenever they spy or attack him. Their fire serves as a protective barrier that shields them from Link's attacks. These flames, however, can be blown away with the Deku Leaf, causing the Bubble to lose all power as it falls to the ground as a regular skull, where it can be attacked normally.[5] They can also be shot down with the Hero's Bow as well. Blue Bubbles curse Link when they come into contact with him. This sets Link on fire and prevents him from using any items so long as the flames remain. These flames can be instantly removed by stepping into a Light source. Blue Bubbles appear in the Earth Temple. The temple's Blue Fog has an identical effect.