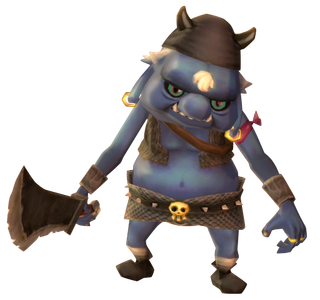 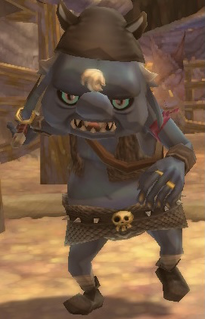 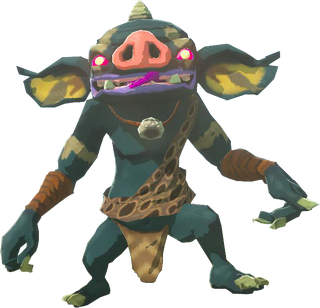 In Skyward Sword, Blue Bokoblins are much stronger than a Red Bokoblin. Their skin and clothing differs depending on the different environments, but it still has the same fixation with exotic undergarments.[3] Blue Bokoblins wear chainmail vest and shorts, also adorning a bandana (similar to Red Bokoblin leaders) and gold ringers on their fingers. The Blue Bokoblin swords are black scimitars contrasting to the Machetes used by Red Bokoblins and the hammers used by Green Bokoblins. They fight the same way as their weaker variants, but can also do a Jump Attack.

During the Horde Battle, the Blue Bokoblin found near the final entrance can do a charging attack similar to Ghirahim in his first fight.

In Breath of the Wild, Blue Bokoblin are stronger than red Bokoblins, as they have more health and higher tier Boko Weapon sets, such as the Spiked Boko Club and the Spiked Boko Shield, as Link will find in the Great Plateau. They are known to be more clever than regular Bokoblins. For instance, they know how to kick away Link's Remote Bombs, as well as moving out of the way of the blast radius.[4] In Master Mode, they are the first Bokoblin encountered in the game. One is also seen lying in defeat with other Bokoblins and White-Maned Lynels in A Premonition.

Blue Bokoblins appear as enemies in Cadence of Hyrule where they move to the beat of the music.

In Hyrule Warriors: Age of Calamity, Blue Bokoblins appear as an upgrade to Red Bokoblins and just like their weaker counterparts, can act as standard troops and large Captains. Both types of Blue Bokoblins can toss their weapons at the player character and then immediately take out a duplicate weapon after finishing their ranged attack.