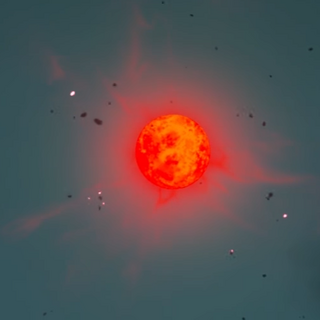 Breath of the Wild
Hyrule Warriors: Age of Calamity

Blood Moons occur at midnight on nights when Calamity Ganon's power reaches its peak and escapes from Princess Zelda's control within Hyrule Castle,[4][1] dyeing the night sky and the Moon red with Malice.[3] The effects of this Malice revive any fallen monsters and enemies, returning them to where they once were prior to being slain. In addition to reviving enemies and Overworld Bosses, Ore Deposits are replenished, and Materials ranging from plants and trees, to gear left lying in the field, effectively respawn, allowing Link to collect them again if the ones he took before the Blood Moon broke in the interim period. Mechanically, Blood Moons are a way to refresh Breath of the Wild's long-term memory and appear to purge the game's cache. Consequently, data stored within the game's long-term memory is reset, including the presence or lack of Materials and Weapons. Blood Moons do not affect things handled through short-term memory, such as Creatures, Grass, Trees, and Barrels. Blood Moons also do not affect storyline progression, side quests, and major bosses such as Master Kohga and the Bosses inside the Divine Beasts. Blood Moons typically occur after roughly 3 hours of gameplay, although one can be induced if the player kills vast amounts of enemies and picks up vast amounts of loot in a short time. If you are in the middle of a boss fight and a blood moon appears, the boss's health is completely regenerated, causing you to have to start from the beginning. Blood Moons can be interrupted by entering specific areas such as Ancient Shrines and Hyrule Castle before midnight (and mini-games) though the game will simply try to spawn one the next night. Blood Moons are always represented by a full Moon regardless of which phase the Moon is in.

The effects of the Blood Moon begin around 11:30 PM, though the Blood Moon itself can usually be seen as early as 10:00 PM when the Moon rises into the sky. At 11:30 PM, Malice will rise from the ground, like when Link is aboard a corrupted Divine Beast, around Pools of Malice, or on the grounds of Hyrule Castle. At 11:50 PM, the sky will turn red, and the clouds will begin to fly by very fast. When midnight hits, a cutscene begins where the Blood Moon has risen, and monsters are seen respawning across Hyrule. Princess Zelda telepathically informs Link that the Blood Moon has risen and urges Link to be careful. After that, the Blood Moon dissipates.[5] If Link attempts to circumvent a Blood Moon by staring into a Campfire or sleeping in a Bed, the cutscene will still play. This can frighten players who have let their guard down, as the sudden loud roar and glow of red can catch them off guard. Also if Link passed time staring at a campfire in an empty enemy camp, the sudden resurrection of the enemies can catch him off guard.

Hino of the Dueling Peaks Stable is the primary source of information on Blood Moons, and can be seen acting strangely during the time period that it affects the overworld. The player can know during the day if tonight will be a Blood Moon, as if they ask Hino what moon will be out tonight, he'll say; "I'm getting that feeling again... Something is going to happen tonight. I can taste it."

Cooking during this time gives Food an effect boost (even 30min level 3 efeect boost).[6] This time period can be easily identified, as specks of Malice linger in the air for those 45 minutes, or by determining if Hino is still acting strange. If he has returned to normal, the effect has worn off, and Link must wait for the next Blood Moon.

During the Scenario "All Hyrule, United", a Blood Moon rises following the Divine Beasts bombarding Calamity Ganon with their lasers after Zelda banished the protective barrier[7], reviving all monsters that were slain during the course of the battle, then revived half of the monsters after they were re-killed by the Warriors. After the united forces of Hyrule broke through the Calamity's forces, the Blood Moon remained in the sky until Calamity Ganon was sealed again.

Following the completion of the last Scenario and the start of the postgame, Blood Moons start appearing. They turn Scenarios into Blood Moon Battlefields[8]. These Blood Moon Battlefield events enhance the enemies of past Scenarios, one Scenario per waxing, changing the icon of the boosted Scenario into a Blood Moon icon, raises the recommended levels by up to sixfold, and colors the map with a red filter. It also improves the quality of Weapon drops, and increases their frequency.

When a Blood Moon rises, it changes the map theme to its "Amid the Calamity" version[9]. Other than doubling the Rupee counts after completing the Scenario battles, including the Divine Beast combat segments, nothing else changes.