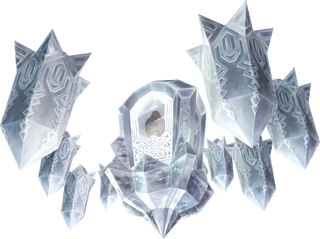 Blizzeta is the Boss of Snowpeak Ruins and the fifth Boss overall of Twilight Princess.[1] The boss is actually Yeta, who leads Link to the second shard of the Twilight Mirror which she holds. She becomes possessed by the Mirror Shard and screams at Link that he cannot have it.[2] The windows of the bedroom then shatter, letting the snow and ice to pour in, surrounding and encapsulating Yeta.

Blizzeta has two main forms during the battle. She will first take the form of a large iceberg and will slowly follow Link around the icy chamber in attempt to deal contact damage. The Ball and Chain must be used to chip away at the layers of ice and eventually damage her. After each hit, Blizzeta slides around the chamber at greater speeds, occasionally summoning a ring of Mini Freezards around her and launching them at Link. After enough hits, Blizzeta is briefly freed from the ice.

Blizzeta will then rise into the air and let out a scream, encasing herself within another ice barrier surrounded by huge ice spikes. The camera switches to an overhead view, where reflections of Blizzeta and the ice spikes can be seen in the icy floor as they hover over Link and attempt to crash down on him. After the ice spikes fall, Link can break them with the Ball and Chain, sometimes releasing recovery Hearts. They can also form a circle around Link in order to trap him for Blizzeta's attack. When she falls, Link can attack her with the Ball and Chain as well.

By attacking Blizzeta three times with the Ball and Chain, she will be defeated. After the fight, Yeta's husband, Yeto, appears and embraces Yeta as she recovers, releasing a flurry of Hearts and a Heart Container around them.

Blizzeta's name is a portmanteau of "Blizzard" and "Yeta".