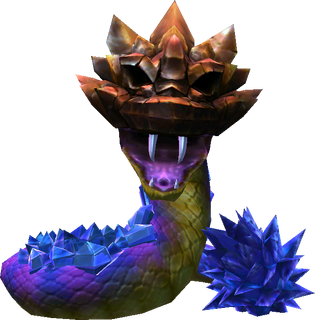 Blizzagia is the Boss of the Ice Temple in Tri Force Heroes.

Blizzagia is a snake-like creature covered in Ice crystals and wearing a rocky mask. It is battled in a large pit with five cave entrances at its rear.

In the first battle phase, Blizzagia emerges from one of the five caves at random and targets one of the Links, as indicated by a colored flash from its eyes. It will then make a powerful lunge toward that Link in an attempt to bite him. If the Links are able to dodge Blizzagia, they will have a brief moment to strike its head with a Magic Hammer before it retreats back to the cave. After four hits from the Magic Hammer, a large crack appears in Blizzagia's mask, followed by the creature roaring loudly and using its cold breath to cover the ground with a layer of Ice.

Blizzagia then begins to slither around the pit in a circular pattern, gnashing its teeth when the Links get near to continue attacking its mask with their Magic Hammers. The Ice crystals along its back can be destroyed with the Magic Hammer or melted with the Fire Gloves to produce Hearts and Energy Potions, and hitting Blizzagia's body with the Magic Hammer will also stop its movement for about one second. Blizzagia's icy tail will harm and freeze the Links on contact, and can only be temporarily melted with the Fire Gloves; it will regrow after five seconds. Occasionally, Blizzagia will slither into one of the caves and re-emerge with its Ice crystals fully restored.

After taking several more hits, Blizzagia's mask will shatter, revealing a glowing jewel on the creature's head. Blizzagia will begin to move more erratically, frequently raising and lowering its head to avoid the Links' attacks, and targeting the nearest Link by slithering in tight coils around him, making it difficult to escape unharmed. However, in this final phase, Blizzagia's head is vulnerable to all weapons including the Sword, and after enough hits the Boss will be defeated.

Blizzagia's name is a portmanteau of "blizzard" and "Volvagia".