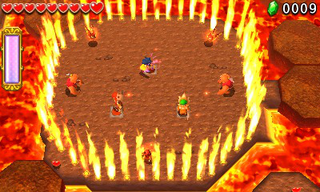 In Stage 1, the Links appear in a fiery cavern, overlooking a pool of magma. The Links cross a river of magma by throwing each other across to three Boomerangs — the last Link must be carried across by having another Link throw a Boomerang at him. A heavy switch on the other side creates a stone bridge over a wider river. The Links then move to a stone that is lifted up into the air by a blast of magma, and ride it to the ledge above. They then must cross another river, but carefully time their approach so as to avoid the river's blasts of magma. The Triforce Gateway lies just ahead.

Stage 2 is a large lake of magma. The Links must carefully walk along the path and unstable ground, which will crumble beneath their weight. On a sloped ledge is the Triforce Gateway, but it is initially surrounded by a ring of fire. Instead the Links must make their way across to an island with spouting flames, and press its three Switches. This traps the Links inside and summons a hoard of Hinoxes and Fire Keese. Defeating them removes the trap, as well as the ring of fire around the Triforce Gateway.

Stage 3 places the Links next to a magma-fall. Fiery rocks will fall and attempt to crush the Links from above. The Links must quickly make their way through the area, using a combination of Totem formations and the Boomerang to carry each other across. At the end of the Stage is a wall of flames blocking the passage ahead. Two switches on the other side can be hit by forming a Totem of three and throwing the Boomerang at them. This opens the way to the Triforce Gateway.

In Stage 4, the Links appear on an isolated island in the middle of a massive magma lake. The magma will periodically lower, revealing red stone that the Links can walk on to the other islands, but will soon submerge again. Here the Links must fight a group of Fire Keese and red Kodongos, the latter of which swims in the magma and can only be attacked when it lowers. Once all the enemies are defeated, the Triforce Gateway opens and the magma will stop rising. The Triforce Gateway can be reached by forming a Totem and throwing the top Link over, and then carrying the other Links across with the Boomerang from a raised island. Chests containing Rupees can also be found on the other platforms.