Blaino is the mini-boss of Turtle Rock, the eighth and final dungeon in The Legend of Zelda: Link's Awakening. It is a short, stocky penguin-like monster that wears large blue boxing gloves and likes to box.

In order to defeat Blaino, Link must use a well-timed Spin Attack. When Blaino lets its guard down, which may signify it charging up for a punch, Link uses Roc's Feather in conjunction when he is directly above Blaino to damage him. If its charged punch hits Link, he will be sent back to the entrance of the dungeon. Many other weapons work as well. After it has taken several sword strikes, it will be defeated.

He has two special types of punches. One where he will pull back for a second and send a punch that will knock link unconscious - If Link is hit by this, there is a good chance Blaino will follow up with his second punch, which takes longer to charge but will knock you back to the dungeon entrance. 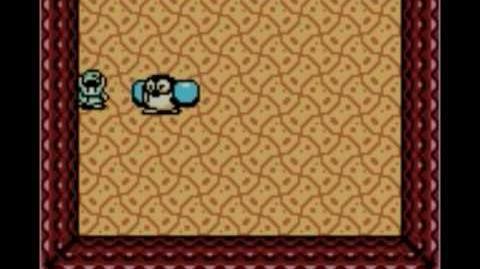 Retrieved from "https://zelda.fandom.com/wiki/Blaino_(Link%27s_Awakening)?oldid=445619"
Community content is available under CC-BY-SA unless otherwise noted.