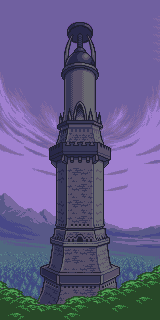 The Black Tower,[1] also known as Ambi's Tower,[2] is a massive tower made of stone featured in Oracle of Ages that was built to the heavens 400 years in Labrynna's past by the order of Queen Ambi.[3] However, after Veran arrived in the past, she manipulated the construction of the project and began using the tower for her own purposes.

The Black Tower closely resembles a typical medieval tower. It has some unique features such as gargoyles near the tower's upper end and its original design for its top which is a disc like structure on the roof of the tower's turret. The tower's height extends over Labrynna, making it visible from nearly any place in the land and surrounding sea.

Originally, the project of building the tower was intended to guide Queen Ambi's love, the Cap'n, home from the sea. These plans for the construction of the tower change, however, when the Oracle of Ages, Nayru, arrives and becomes Queen Ambi's most trusted adviser through Veran's cunning. She convinces the queen to build the tower all the way to the heavens so as to go down in history as Labrynna's "greatest queen."[4][5] She also tricks the queen into allowing her to use the powers of the Oracle of Ages to create an endless day so the people would be forced to work on the tower without ceasing. Oblivious to the misery she was bringing upon her people,[6] Queen Ambi's project, Ambi's Tower, begins to earn a new title amongst her subjects: the Black Tower.

Link begins a quest in secret to find the eight Essences of Time, as the Maku Tree believes their power is needed to defeat Veran. Over the course of his quest, the tower continued to rise toward the heavens.[7] After completing the sixth dungeon, the young hero gets informed that Queen Ambi has left her palace temporarily to inspect the tower's construction. Link takes this opportunity and enters Ambi's Palace and is able to use Mystery Seeds to eject Veran from Nayru's body. At this moment, Queen Ambi returns to the palace and inadvertently becomes Veran's new host,[8] leaving Veran now in complete control of the construction of the Black Tower. While Link continues his quest for the Essences of Time, the tower soon reaches the heavens with Labyrynna being controlled by a possessed Queen Ambi.

By the time Link retrieves the seventh Essence of Time, the Black Tower is complete. The possessed Ambi climbs to its turret, and Veran absorbs greater power than before, allowing her to stop time even without Nayru's abilities. Veran inflicts greater hardships on the people than before, intending to use their sorrow to light her Flame of Sorrow for the Dark Rites.[9]

With all eight Essences of Time, Link receives the Huge Maku Seed from the Maku Tree, who warns the young hero that he must stop Queen Ambi at the Black Tower and cast down Veran for good.[10][11]

Link heads for the Black Tower and arrives to see that the entrance to the Turret is concealed by a powerful illusion that creates three images of the doorway into the tower, while causing those who try to enter them to "get lost" and return to outside the doors. Using the Huge Maku Seed, Link is able to break the illusion that Veran had cast and climbs to the Turret. Here, Link finds Ralph has already arrived to defeat Veran and Ambi, but Veran dispatches him and casts Ralph aside before battling Link, who ultimately prevails and destroys Veran. Before disappearing, Veran laughs and warns that this would not stop all the negative energy and sorrow she had created from passing through the Black Tower and on into the hands of Twinrova, lighting the Flame of Sorrow. This fulfills Veran's intent for the Black Tower, bringing the return of Ganon one step closer. However, Queen Ambi is restored to her former self and returns to being a kind queen.

The lower areas of the Black Tower are filled with a variety of monsters, and the path up the tower is linear. At the entrance to the Turret, Link must have the Huge Maku Seed to break Veran's illusory magic and open the path forward; otherwise he will loop through the room without progress. Link may attempt to climb the tower without the Huge Maku Seed, but his journey will stall at this point.

The Black Tower's Turret poses two more puzzles to Link to bar his way. One is a maze of staircases between two floors, and Link must make his way through the maze to find the stairs up. On the next floor, Link is surrounded by flames in a room full of staircases, and must follow the right flame (the one that appears behind him when he ascends the stairs) until it shows him which staircase to take. Taking any other staircase forces Link to enter a floor of monsters, and he must destroy them before exiting back to the room of staircases. The true staircase takes him to the top floor of the tower, where Veran's chamber awaits.

In the Present about halfway through a Linked Oracle of Ages, Impa will be at the Black Tower. She will warn Link that Vire has kidnapped Princess Zelda and taken her into the tower and asks him to go save her.[12] The rescue of the Princess plays out like the original Donkey Kong game with Vire as Donkey Kong, Princess Zelda as Pauline, and Link as Jumpman (Mario). After she is saved, she will give Link the Blue Joy Ring.