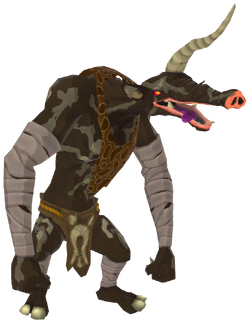 Black Moblins are recurring Enemies in The Legend of Zelda series.[1][2]

Black Moblins are tall, heavy monsters that can be found all over Hyrule.[3] They are stronger, more resilient variants of Blue Moblins.[4] They are usually armed with the strongest Moblin Weapons.[5] When defeated, they drop Moblin Horns, Moblin Fangs, and Moblin Guts.

Black Moblins are stronger than Red Moblins, possessing more health and attack power, along with having more powerful spears that they can throw at Cadence, Link, Yves, and Zelda. They move to the beat of the music and share the same beat pattern as the other Moblins, moving on every other beat, having to crouch for one beat before hopping to an adjacent tile on the second beat. When they're close enough, they will throw a spear at the heroes, stopping on one beat to aim, throwing it on the second, and letting it land on the third beat. Afterwards, they will try to retrieve their weapon until it is either destroyed or picked up by another Moblin or even the hero if they are using the Power Glove. Once they lose their spear, they will try to look for another one or if there are none, try to attack the heroes head on. Their spears are the second-strongest, dealing 3 Hearts of damage to any enemy that get hit by them, being second to only the Purple Moblin spear in terms of power. During the events of Symphony of the Mask, Black Skull Moblins appear but otherwise act the same as in the main game.

Black Moblins reappear in Hyrule Warriors: Age of Calamity first appearing in The Road Home, Besieged. During the Pulse of the Ancients DLC Missions, some carry containers holding Bomb Barrels on their backs. A variant utilizing Sky Octoroks appears during EX Liberate the Royal Ancient Lab. 2 Black Moblins are also absorbed by Ganon to recover his health after taking a beating from Terrako.