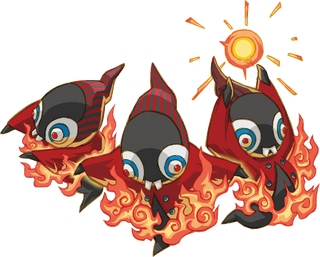 Blaaz is the Boss of the Temple of Fire in Phantom Hourglass.[2]

When the battle starts, Blaaz splits into three smaller duplicates, all of which are impervious to Sword slashes. These duplicates float around Link, not separating too far from each other as they attempt to surround the hero on all sides. Eventually, all three will charge up a ball of Fire, unleashing it upon Link. The projectile's charge time takes several seconds and travels in straight lines. Their individual attacks can be interrupted mid-charge with a Boomerang attack. Although the three monsters appear identical, the icons representing them on the map have different number of horns. By drawing a path for the Boomerang and striking the enemies in ascending order, the monsters will combine into their true form. Otherwise, they will begin to combine, but halt halfway through.

Once Blaaz returns to normal, he again becomes vulnerable to Sword slashes. While in full form, Blaaz can teleport randomly around the area and shoot falling rocks of Fire. If Link attacks him with Sword strikes, Blaaz will not be able to unleash this attack. Eventually, he will split up into his separate forms once again.

After defeating the Boss, Link will earn a Heart Container, gather his first Sand of Hours, and earn the aid of Leaf, the Spirit of Power.

When Link and Ciela enter the Temple of Fire in the Phantom Hourglass manga by Akira Himekawa, they are confronted by Blaaz. He says the two are fools and will fall before his flames.[3] The monster splits into three and attacks Link.[4] The hero attempts to attack Blaaz's smaller forms one at a time,[5] although is unable to because the monsters are surrounded by flames.[6] After Link realizes that he has to attack from a distance,[7] Ciela directs him to a Treasure Chest that houses a Boomerang.[8][9] Link uses the Boomerang to defeat Blaaz's split form. Blaaz becomes whole again but Link destroys the monster with his Sword.[10] Blaaz disintegrates into the Sand of Hours,[11] freeing Leaf from his hold.[12]