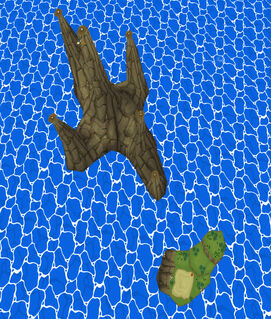 Bird's Peak Rock is an island located on the Great Sea in The Wind Waker.[1]

Bird's Peak Rock is named after the large number of Kargarocs and seagulls that nest at its peaks. It is comprised of two parts; the first is a small grassy area with a secret cave on it, while the second island is impossible to walk on, but there are switches on the nests at its peaks. By using a Hyoi Pear to control a seagull, the seagull can hit the switches, allowing Link to receive a chart to one of the Triforce Shards.

A Blue ChuChu can also be found on the smaller of the two islands.