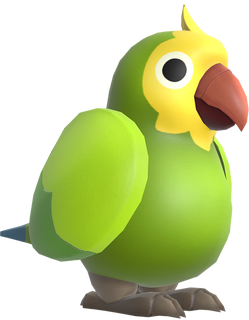 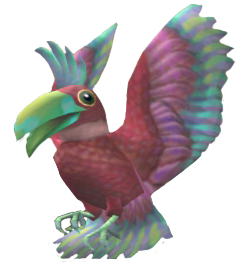 Birds are recurring Animals in The Legend of Zelda series.[1]

In Oracle of Ages and Oracle of Seasons, the Know-It-All Birds provide Link with helpful tips about the gameplay.

In The Minish Cap, many birds live on the Fortress of Winds and on the Tower of Winds' roof. One of those birds, Zeffa, is a blue bird who can, similarly to the Flute Boy's pet, warp Link to any one of the 8 Wind Crests scattered across the overworld, when summoned by using the Ocarina of Wind.

In Twilight Princess, Hena and Coro each own a bird, named respectively Purdy and Trill. Trill runs a shop near the Forest Temple that sells Lantern Oil and Red Potion. The bird Plumm might belong to their sister, Iza, as Plumm can be found at the finish point of Iza's Rapids Ride.

In Spirit Tracks, Link can play the "Song of Birds" to summon birds (Cuccos included). The young hero can use his Whip to latch on the trapeze that Whip Birds [2] are holding, which allows him to be carried by the birds to certain areas. Also in this game, doves appear in Aboda Village and while riding the Spirit Train in the Forest Realm.

In Tri Force Heroes, pink, yellow, and a rarer blue bird appear in the town of Hytopia. They are slightly smaller than the variety found in A Link Between Worlds. They tend to flock in small groups and will fly away when approached. Mimi believes that if a picture of a blue bird is taken, everyone who sees the picture will be happy.[3] However, there is no significance to this. The Street Merchant will pay Link more for Materials if he has seen a blue bird.

Cuccos made their first appearance in A Link to the Past and are among the first animals introduced in the series. Cuccos make their return in Link's Awakening, and in most games since. The Flying Rooster introduced the concept of Cucco Gliding.

Cuccos made their first 3D appearance in Ocarina of Time. A Cucco is essentially the Hylian version of a chicken. This game also included the concept of Cucco gliding, actually requiring Link to make use of this mechanic to find all of the Cucco Lady's Cuccos. Cuccos have had many uses throughout The Legend of Zelda series, sometimes comical, such as in Majora's Mask, where they are used as a getaway escape by the Bombers.

Cuccos have appeared in the following games: A Link to the Past, Link's Awakening, Ocarina of Time, Majora's Mask, Oracle of Ages, Oracle of Seasons, Four Swords Adventures, The Minish Cap, Twilight Princess, Phantom Hourglass, Spirit Tracks, A Link Between Worlds, Tri Force Heroes, and Breath of the Wild.

Doves are common all throughout Hyrule in Spirit Tracks. They largely replace the Seagulls from Phantom Hourglass and behave similarly, although they are more interactive than the seagulls were. Using the Song of Birds near one will cause it to fly and land on Link's head. It will stay on his head until Link rolls, spin attacks, or hits something hard with his sword.

Ducks are found in Ordon Village and in the Fishing Hole in Twilight Princess. They can either be found swimming in the pond or walking along the banks.

In Twilight Princess, Link can blow into Hawk Grass in order to summon a hawk, which he can use to solve certain puzzles. The hawk can be aimed and released to retrieve faraway objects or attack enemies. After this, the hawk will fly away, but it can be called on again if need be. If Link calls on the hawk as a Wolf, the Hawk will be able to point out secrets in the area. At the beginning of Link's quest, it is necessary to summon a hawk to get Uli's crib back from a monkey.

A mysterious Owl first appears in Link's Awakening to share his words of wisdom with Link.

Kaepora Gaebora is the name given to the wise owl from Ocarina of Time, Majora's Mask, and Four Swords Adventures.

Link can control seagulls in The Wind Waker using a Hyoi Pear. At the Forsaken Fortress, several of them circle around the window of the room in which Aryll is being held captive. They sometimes fly alongside the King of Red Lions, Link's boat.

In Phantom Hourglass, Seagulls return mainly to add atmosphere while traveling by sea. They will follow Linebeck's Ship in groups of four. If Link shoots one of them with the cannon, they will all flee.

In Skyward Sword, all the inhabitants of Skyloft are paired up with a large, rideable bird known as a Loftwing. Link has a Crimson Loftwing, a breed previously thought extinct, which he can use to fly around in between the various islands in the Sky. Loftwings are a necessary part of life in Skyloft, seen when Groose and his henchmen, Cawlin and Strich, steal and hide Link's Loftwing.

Chirris are small Birds that can be found on the Surface in places such as Faron Woods. There are three varieties: yellow, orange and blue.

A Bird listens to Nayru as she sings and strums the Harp of Ages.

Birds in The Legend of Zelda series
Community content is available under GNU Free Documentation License unless otherwise noted.
Advertisement