This article is about the enemy from Ocarina of Time, Majora's Mask, and The Wind Waker. For the boss in The Minish Cap, see Big Octorok.

"This one time, our ship got caught in this giant Whirlpool, you get me? And what's there waiting for us in the middle of it? ... the giantest squid you ever seen! All over its body the thing had these beady, gnarly, glowin' eyes... and I don't even KNOW what was goin' on with its tentacles! ...Now that I'm thinkin' on it, those were the squirreliest eyes I ever seen! If I ever come across that beastie again, I'll whale him in the eyes. THAT'S what I'll do!"
— Candy

Bigoctos, also known as Big Octos, are recurring enemies in the Legend of Zelda series. As their names suggest, Bigoctos are oversized versions of water-dwelling Octoroks. However, unlike regular Octoroks, they sometimes have large shells on their backs and are incapable of shooting rocks at Link.

A Bigocto appears as the mini-boss of Inside Jabu-Jabu's Belly. After carrying Princess Ruto through the dungeon, Link comes across a room that holds the Zora's Sapphire. After throwing Ruto onto the tall platform, she retrieves her stone; however, shortly thereafter, the platform rises up from the ground to the floor above. Ruto is taken away, and in her stead appears the Bigocto. After its defeat, Link is able to use the platform to advance through the dungeon.

Big Octos appear as enemies in the Southern Swamp. They block the entrances to caves in the area and cannot be defeated by conventional methods before Link obtains the Hero's Bow; instead, they are defeated when hit with one of the cruise boats Link can hire from the Swamp Tourist Center. One Bigocto, located in the Southern Swamp near the Deku Palace, blocks the way to the Deku Shrine; this Big Octo disappears only when Link has cleared Woodfall Temple and cleansed the swamp water during the current three-day cycle. At this point, other Big Octos that have not been defeated will also disappear.

Big Octos are drastically different from their Ocarina of Time predecessors: they are large, blue, and squidlike in appearance, with large yellow eyes covering their bodies. They reside in the Great Sea and are found in a total of six locations, which are identified on the Octo Chart. When Link comes across a spot where a large group of seagulls have congregated, a whirlpool will begin pulling the King of Red Lions to its center, where the Big Octo resides. Link must use the Hero's Bow, his Boomerang, or bombs to shoot all of the Big Octo's eyes before the Big Octo inhales him and shoots him elsewhere in the Great Sea. The Boomerang destroys an eye in three hits, arrows destroy an eye with two hits, and bombs destroy an eye in one hit. Unlike most enemies, a Light Arrow will not kill it in one hit, but will destroy an eye in one hit.

Once the four-eyed Big Octo on the outskirts of Two-Eye Reef has been killed, a Great Fairy will provide Link with an upgrade to his Magic Meter. When Link kills a Big Octo at any other island in the Great Sea, a Light Ring appears. If the Big Octo had eight eyes, Link will find an orange Rupee upon pulling up the chest beneath the Light Ring; if the monster had twelve eyes, the chest will contain a Piece of Heart.

"There was once a giant Octorok in Hateno Bay, large as a mountain, which terrorized the village's fishers. Hearing of their distress, Prince Sidon went forth to personally eliminate the offending Octorok. But this Octorok was a tricky beast. After the prince dodged one of the stones it spit, it inhaled him whole. Such had been the fate of many strong warriors who went to slay the Octorok. Not one had come back alive. Just as it seemed Prince Sidon would be counted among them, the giant Octorok twisted in pain. The tip of a Silverscale spear pierced the Octorok's stomach from within, revealing itself as the source of the beast's agony. Incredibly, Prince Sidon had fought his way out by stabbing his spear over and over into the monster's stomach. Unable to bear the pain, the Octorok coughed up the prince and scrambled to escape. Ever since, the fishers of Hateno Bay have passed down this heroic tale: The Prince Who Slew the Fell Octorok"
— Prince Sidon's Great Escape

Though Bigocto do not appear physically in The Legend of Zelda: Breath of the Wild but one of the Zora Stone Monuments mentions a large Octorok as big as a mountain which terrorized Lurelin Village fisherman in Hateno Bay in the past. Prince Sidon of the Zora heroically confronted the beast but like some many before him was swallowed up by the beast. He survived by killing the beast from within using his Silverscale Spear. Although it is never referred to as a Bigocto, its basic description recalls that of the incarnation of Bigocto from The Wind Waker with elements of Breath of the Wild Rock Octoroks. If the giant Octorok was a Bigocto it would be the second time in the series a member of Zora royalty encountered one as the young Princess Ruto briefly encountered a Bigocto in Ocarina of Time. Given no giant sized Octoroks or Bigocto appear in Breath of the Wild it can be assumed they are extremely rare in Hyrule's waters or when Prince Sidon slew the one in Hateno Bay they became extinct. Interestingly, this Giant Octorok was apparently never resurrected by Calamity Ganon making it one of the few monsters or enemies he doesn't resurrect after they are slain. 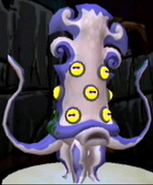 The Big Octo figurine from The Wind Waker
Add a photo to this gallery
Retrieved from "https://zelda.fandom.com/wiki/Bigocto?oldid=536160"
Community content is available under CC-BY-SA unless otherwise noted.