Zelda Wiki
Register
Don't have an account?
Sign In
Advertisement
in: Articles Lacking Renders, Items, Breath of the Wild Pages with Invalid or Missing Terms,
and 12 more
English 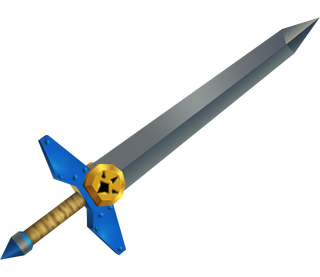 Ocarina of Time
4
Breath of the Wild
50

Breath of the Wild
60

The Biggoron's Sword is a recurring Item in The Legend of Zelda series.[1][2] 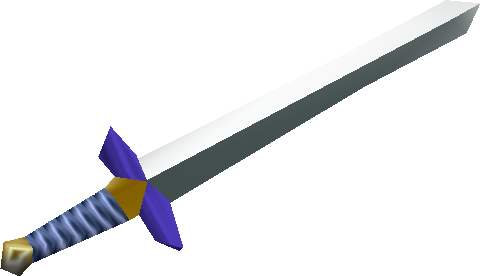 In Ocarina of Time, the Biggoron's Sword is a far sturdier version of the Giant's Knife, which Biggoron crafted for the Master Craftsman, and is a very powerful sword.[3][4] It can be obtained completing the Trading Quest.[5] The blade is much longer than the Master Sword and deals twice as much damage. It's handle also changes from yellow to blue. However, it must be wielded with two hands, meaning that Link cannot defend with a Shield while equipped. If the Shield button is pressed, he attempts to protect himself with the blade.

Despite being the strongest weapon, the Biggoron's Sword is incapable of defeating Ganon as only the Master Sword can deliver the final blow. However, it can be useful during the final battle, as Ganon knocks the Master Sword out of reach before getting it back.

In Breath of the Wild, the Biggoron's Sword is an amiibo exclusive two-handed Weapon. The Weapon will rarely appear in a Treasure Chest after scanning the Ocarina of Time Link amiibo using the amiibo (Rune) Rune, but only after freeing one of the Divine Beasts. It's noted to have been forged by a Goron craftsman for a hero who travelled through time, with a cutting edge that speaks to its creator's master.[2] It has a base attack power of 50.

Biggoron's Sword is made of metal, and will therefore attract Lightning if it's equipped during a storm. It will also sink in water, but since it's magnetic, it can be picked up with the Magnesis Rune. Finally, it won't burn if exposed to Fire or a Scorching Climate.