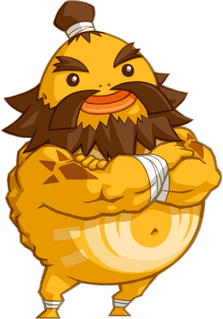 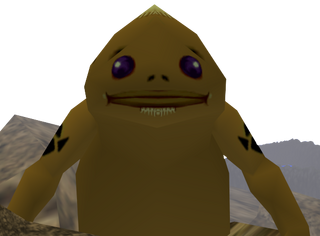 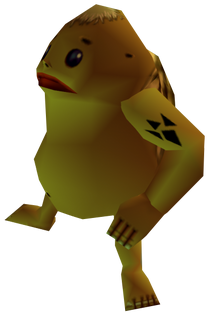 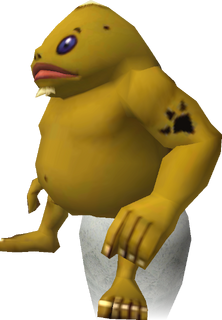 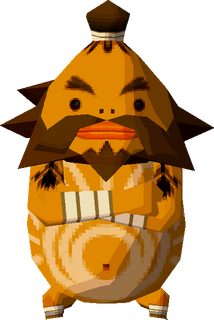 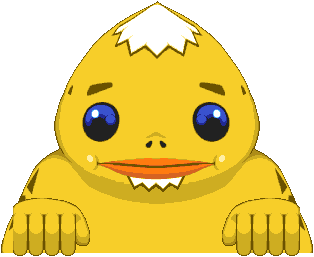 Biggoron is a recurring character in The Legend of Zelda series.[2][note 1]

In Ocarina of Time, Biggoron is a gigantic Goron living on Death Mountain next to the Great Fairy Fountain. He is a skilled blade maker,[4] and creator of the Biggoron's Sword. To obtain it, Link must first complete the Trading Quest. During the Trading Quest, Link brings Biggoron the Broken Goron's Sword to fix, but finds that Biggoron is unable to because of his irritated eyes. He then sends Link to get some Eye Drops, and gives him a Prescription. Eventually Link brings back the Eye Drops which clears Biggoron's eyes. He then gives Link the Claim Check for the Biggoron's Sword, which takes three days to complete. Biggoron has a little brother, Medigoron, who is also in the Sword-making business, although the blades he produces are inferior.[5]

In Majora's Mask, Biggoron appears as the guard of the Snowhead Temple. He goes to Snowhead to investigate why spring has not yet come,[6] but at some point he inexplicably turned invisible and caused a blizzard that prevented entry to the temple. To enter the temple, Goron Link must play the "Goron Lullaby," putting Biggoron to sleep, thereby clearing the entrance. After defeating Goht and bringing spring to Snowhead, Biggoron can be found sitting in the gorge unaware of why he was there and what he had been doing.[7][6] The reason why he became invisible and created the blizzard is unknown, but it is possible that he was under Skull Kid's influence.

In Oracle of Seasons, Biggoron appears atop the peak of Goron Mountain. When the Temple of Seasons sank, the climate on the mountain became colder, causing Biggoron to catch a cold.[8][9] Biggoron's ailment can be cured with the Lava Soup as part of the Trading Quest. In return, he gives Link the Goron Vase.

In a Linked Game of Oracle of Ages, a lone Goron on Rolling Ridge will provide Link with the Biggoron Secret. Telling the secret to Biggoron in Oracle of Seasons allows him to forge the Biggoron's Sword.[10][11]

Biggoron appears in The Minish Cap atop the peak of Veil Falls after Link Fuses Kinstone Pieces with the rightmost Goron Digger in the Goron Cave. After defeating Vaati,[12] Link can visit Biggoron, who offers to eat his Small Shield and transform it into the Mirror Shield.[13][14]

In Phantom Hourglass, Biggoron is the name of the chief of Goron Island. Unlike past appearances, Biggoron is closer to the size of an average Goron, although he is still the biggest Goron on the island. He is the father of Gongoron, and gives Link permission to enter the Goron Temple after having tested him in a quiz.

In Soulcalibur II, the Biggoron's Sword's description mentions Biggoron as the best blacksmith in Hyrule,[15] although he does not appear in the game.

In Hyrule Warriors, Impa wields the Giant's Knife, which can be upgraded to the Biggoron's Knife and Biggoron's Sword. The Sword was forged by Biggoron himself.[16]