Zelda Wiki
Register
Don't have an account?
Sign In
Advertisement
in: Bridges, West Necluda, Locations, Locations in Breath of the Wild 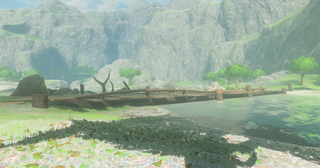 Big Twin Bridge is a location in Breath of the Wild.[1]

The Big Twin Bridge is one of two bridges that cross Squabble River to the east of Dueling Peaks. The second bridge is the Little Twin Bridge. The Big Twin Bridge is mostly dilapidated and has pieces missing. Debris has also built upon the eastern side, including dead Trees, stone wreckage, and a stone slab. A traveler named Mezer can be seen crossing the Bridge.