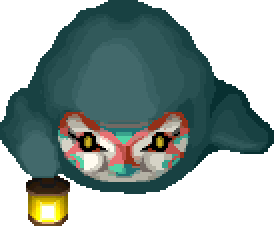 The Big Poe is a boss that appears twice in Four Swords Adventures during the Near the Fields stage.[1] He is the leader of the ghosts of the Graveyard, and attempts to stop Link from reaching the White Maiden. He appears in two forms; his first form resembles the mask of Jalhalla, and his second form fights in a similar manner to the aforementioned Poe, but any relation between the two enemies is unstated. Big Poe's true form is that of a much smaller green ghost; the forms he takes during battle are actually disguises.

Big Poe makes his first appearance as the boss of The Swamp, appearing in the Graveyard just south of Hyrule Castle. When the four Links reach an pitch black area of the graveyard with four torches, they must all step on one of the star-shaped Floor Switches to awaken the ghost. Big Poe will first appear as a mask bearing a resemblance to that of Jalhalla. The mask will float around and occasionally stop and spin while spewing fire to attack.

To defeat him, the Links must light one of the four torches when the mask is nearby. This is easiest to do if each of the Links stays near one of the four switches so that many torches can be lit at once, giving Big Poe nowhere to hide. Once he moves into the light, Big Poe will be stunned, allowing the Links to slash him with their Swords. When hit, Big Poe will release Ghinis and Bubbles and reduce in size and move faster. After five hits however, Big Poe will explode, leaving behind a small green ghost that will quickly flee towards Hyrule Castle.

Big Poe is seen once again at the end of the Infiltration of Hyrule Castle, now in a large Poe-like body with the typical lantern of their kind. Like before, the four Links must light the four torches using their Lamp to cause the monster to reveal itself. Like before, Big Poe cannot be harmed at first, and will instead float around trying to catch one of the four Links in the light of his torch. When he does so, he will attempt to blow the Links into the spiked traps around the area. The Links must again light the four torches around the area, but Big Poe will attempt to blow them out if they are caught while doing so. When the Big Poe blows out a torch, a Ghini will appear from the flame.

If the Links manage to light all four torches at once, Big Poe will panic and can be struck with the Four Sword. When hit, he will angrily suck the Links right inside his body, where his true form lies. The small green ghost inside the Big Poe's belly will hop around wildly and attack with fireballs, but is otherwise quite vulnerable; the Links must strike it as much as they can before Big Poe spits them back out. The Links will then have to repeat the process to continue to harm the Big Poe. After three or four rounds, the Big Poe will finally be destroyed for good.