Not to be confused with Big Octorok, the Boss in The Minish Cap. 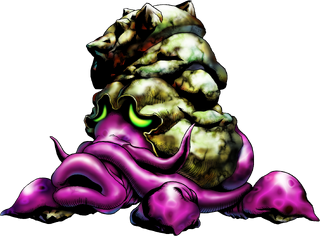 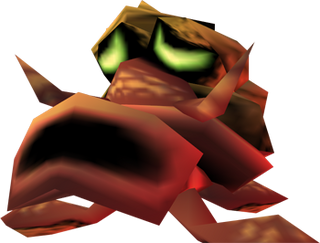 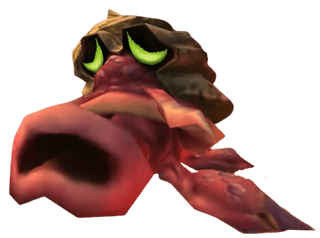 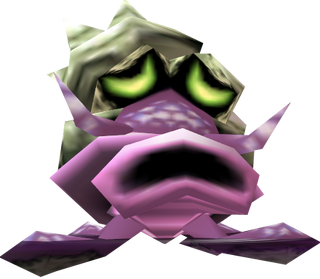 Majora's Mask
Suck In / Spit Out:

The Wind Waker
Whirlpool Draw In / Spit Out:

Big Octos,[1] also known as Bigoctos,[citation needed] are recurring Bosses and enemies in The Legend of Zelda series.

In Ocarina of Time, the Big Octo had made its home Inside Jabu-Jabu's Belly, where it is the Sub-Boss of that Dungeon. When Link arrives at its lair, he throws Princess Ruto up on top of a platform to get the Spiritual Stone of Water. Upon grabbing it, however, Princess Ruto is taken up to the next room by the platform. The platform then sinks, revealing the Big Octo in its entirety.[2]

The Big Octo circles around the spinning platform and chases after Link. Link in effect, must do the same thing- circle around until he reaches the Big Octo. The Big Octo is susceptible to the Boomerang, which when hit by it, stuns it and forces it to turn around. Its only weak spot is on its back, which is only revealed once it is stunned. Link must run around the circle and try to hit its back before it starts to run again.

In Majora's Mask, Big Octos appear in the Southern Swamp, blocking the way to the Deku Palace and the Deku Shrine. They attack Link by sucking him in and spitting him out if he gets too close. They can be defeated by ramming into them with the boat on the Boat Cruise, thus opening the way to the Deku Palace. They can also be killed with the Hero's Bow once Link retrieves it from the Woodfall Temple. Upon completion of the Woodfall Temple, they disappear from the swamp.

In The Wind Waker, Big Octos are large, squid-like creatures that inhabit the waters of the Great Sea, and will appear if Link sails nearby. A total of 6 Big Octos can be found in the Great Sea, one has 4 eyes, three have 8 eyes, and two have 12 eyes. To defeat one, Link must shoot and destroy all of its eyes with a projectile, either with the Hero's Bow, the Boomerang or with Bombs. 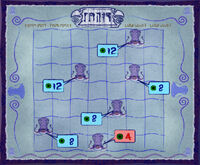 The Big Octos cannot be seen until it rises out of the water, but there is always a large flock of Seagulls circling above them.[3] As the Big Octo surfaces, the whirlpool slowly pulls Link and the King of Red Lions into its mouth. If all of its eyes are not destroyed before reaching the center of the whirlpool, the Big Octo sucks Link up and spits him out, sending him out to the edge of the quadrant. However, if Link manages to defeat the Big Octo before he is sucked in, the Big Octo will leave behind a reward.

The Octo Chart is a Special Chart that can show Link where the six Big Octos are located, as well as the number of eyes associated with each one.[4] The Octo Chart can be found by using Treasure Chart #26 on the Northern Triangle Island to pinpoint where the Octo Chart is located at the bottom of the Great Sea.

The Big Octo by Two-Eye Reef has a Great Fairy trapped in its clutches, and Link can free her by defeating the Big Octo. Once freed, the Great Fairy will thank Link and double his Magic Meter as a gift for releasing her.[5]

In Hyrule Warriors Legends, Big Octos appear on the Great Sea Map and the Master Wind Waker Map of Adventure Mode. Their appearance is an 8-bit representation based on their appearance from The Wind Waker. On Map squares with a Big Octo, a Great Sea Rule is applied to the Map Battle that causes all damage to the Warrior to become devastating, reducing them to one quarter Heart. The Great Sea Rule can be removed by defeating the Big Octo with a Boomerang Item Card.

Octos in The Legend of Zelda series
Community content is available under GNU Free Documentation License unless otherwise noted.
Advertisement