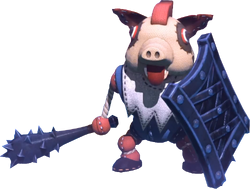 In Nintendo Land's recreation of Hyrule, Big Moblins first appear as bosses at the end of certain stages, either appearing alone or sometimes with a companion or a group of smaller Moblins. They are incredibly resilient and hard to defeat, and are only vulnerable after attacking or briefly prior to their strike. Their hits are powerful and send opponents flying, and must be blocked with a Shield or dodged entirely. In later stages, Big Moblins appear as regular enemies, and stronger varieties with helmets appear both as bosses and enemies.

A depiction of a Big Moblin can also be obtained as a Prize for the Nintendo Land Plaza. When interacted with, the Big Moblin Prize will roar.