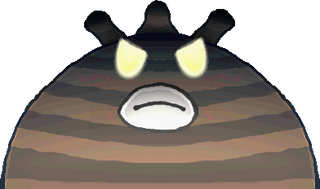 Big Liar is the second boss in Ripened Tingle's Balloon Trip of Love. He is the god of the Usotami and resides dormant in a cave at the end of the Usotami Village. Tingle needs an offering in order to enter his lair, where Kakashi is being held captive. He is encountered on Page 11.

Tingle, Buriki, and Lion enter Big Liar's chamber in Usotami Village in an attempt to rescue Kakashi, after he was kidnapped by Segāre. Once they free Kakashi, who was chained to a stalagmite, Segāre appears, and calls up Big Liar. However, the monster eats Segāre before turning towards Tingle.

Rather than a fight, Big Liar asks Tingle multiple questions as a test if he and his friends want to leave alive. If Tingle gives an incorrect answer, he will be transformed into a goat-like animal, resulting in a game over. Tingle must first offer Milk to calm him down. Big Liar will then posses Buriki to speak directly with Tingle, and the quiz will start. Through Buriki, he will ask a total of ten questions but, since they are in a village where everyone speaks in lies, Tingle must give the opposite answer. At the end, Big Liar will give Kakashi his golden medal, and return Buriki to her normal state. Finally, Liar will come to rescue {{Term|RTBToL|Tingle} and his friends.