Not to be confused with the Big Baba, a combination of a Deku Baba and a Deku Like that appears in Twilight Princess. 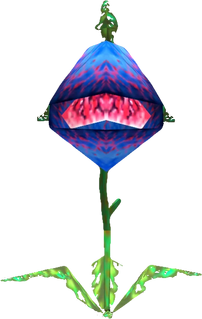 A sub-species of the Deku Baba, the Big Deku Baba is a colossal version of the Deku Baba. It is identical to the Deku Baba in every way but size. It is unknown whether the species existed during Link's childhood in Ocarina of Time, but by seven years later, they became infamous for terrorizing the Kokiri Forest. One is even found just outside of Link's House. Big Deku Babas appeared in Kokiri Forest due to the evil radiating from the Forest Temple. Big Deku Babas in the forest vanished after Phantom Ganon was defeated, but can still be found in the Forest Temple.

Big Deku Babas exist in Link's childhood in Master Quest, and are considerably more threatening due to their appearance early in the game when Link has considerably less health and a smaller stature, appearing as early as the first dungeon.