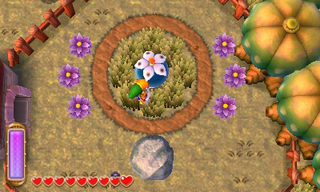 Super Bomb
Powder Keg
A Big Bomb Flower is a special type of Bomb Flower that appears in A Link Between Worlds.[1]

Big Bomb Flowers act similarly to regular Bomb Flowers, but they are much larger and rarer. To use one, Link must first lead it by pressing A when facing it, then walk to the desired destination and press A again to detonate it. If an enemy touches a Big Bomb Flower before Link has willingly detonated it, it will explode and the young hero will have to retrieve a new one from where it was first found.[2] Big Bomb Flowers will also explode when struck by Link's Sword, or any other damage-dealing weapon, or if clumps of Grass and Rocks are tossed at them, and can be manually ignited with the Lamp. If Link is within the blast radius of a Big Bomb Flower, he will be dealt three Hearts of damage. Unlike the Super Bomb, a Big Bomb Flower cannot be halted when Link faces it and presses A or when Link dashes with the Pegasus Boots; instead, it can be stopped when Link merges with a wall.

Only two Big Bomb Flowers can be found in the game. The first is located outside the Bomb Flower Store south of Thieves' Town in Lorule. It can be borrowed from the Bomb-Shop Man for a one-time price of 200 Rupees,[3][2] and Link may enter the garden containing it after paying and destroy the boulder blocking the path from outside with it.[4] Afterwards, Link may take the Big Bomb Flower anywhere, provided that it is possible for the young hero to walk there from the Bomb Flower Store. The Big Bomb Flower is necessary to destroy several large boulders as well as to give Link access to the Swamp Palace; if the young hero can successfully manage to lead it to the Swamp Palace, he can use it to destroy the large boulder blocking its entrance, draining the hallways of water and granting him full access to the dungeon.

A second Big Bomb Flower also appears briefly in Lorule Castle. Unlike the first one, it is free for Link to use, and cannot be taken out of the room in which it is found. Link must lead it safely through a maze, avoiding several Soldiers and a Medusa, eventually taking it to a large, cracked boulder at the end. He must use it to destroy the boulder, granting access to a room in which a Moldorm resides.