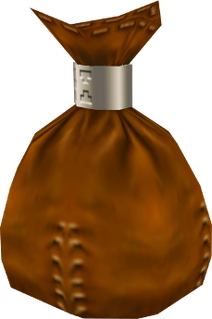 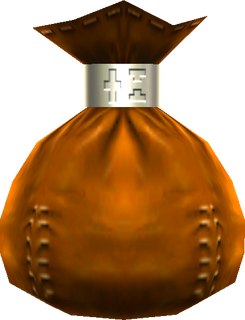 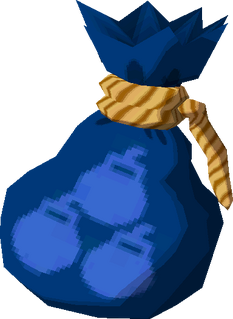 In Oracle of Seasons, the Big Bomb Bag is sold at the Subrosia Market for Bombs and 50 Ore Chunks.[2] It allows Link to carry 20 additional Bombs.[note 1]

In Oracle of Ages, the Better Bomb Bag is obtained from an unnamed Fairy at Talus Peaks.[4] In the present, Link can climb Vines up to a small lake on in southwestern corner of Talus Peaks. He can make the water recede by going to the past and changing the water flow down Talus Peaks from west to east. This reveals two statues and a Sign that says not to throw anything into the water.[7] If Link throws a Bomb into the water and approaches the lake between the two statues, a Fairy appears and asks if he threw a Golden Bomb or a Silver Bomb.[8] If Link tells the truth by responding A regular one, the Fairy rewards him for his honesty by increasing his Bombs-carrying capacity by 20.[9]

If Link lies to the Fairy, it will punish him by either by reducing his Life Energy down to a single Heart (if he responds with Golden),[10] or by confiscating all his Bombs (if he responds with Silver).[11] To obtain the upgrade Link must leave the area and return, then throw in another Bomb.

Three Big Bomb Bags can be obtained in The Minish Cap, increasing the number of Bombs Link can hold from 10 to 30, 50, and 99 as each one is obtained.

One can be purchased from Stockwell's Shop for 600 Rupees, one is given by the Great Mayfly Fairy after Link throws a Bomb into her Fountain on Mount Crenel, and the third is found in a Chest that appears after Link Fuses Kinstone Pieces with Belari.