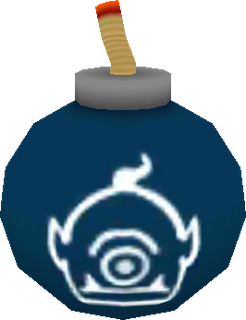 Nice Bomb (ALBW)
Big Bomb are traps and items in The Legend of Zelda series.[1]

Big Bombs are a dangerous type of Bomb in Four Swords Adventures. Big Bombs are dropped by Shadow Link and found as traps within Treasure Chests.[2] Big Bombs explode after 10 seconds and blast the entire area. If the Links are hit by its blast, they will be defeated instantly and must escape to another screen to survive.[3] The Links can also avoid its blast by escaping into a hole,[4] walking into a Cave or diving underwater.[5]

When one of the Link wears the Big Bomb Outfit, all Bombs and Bomb Flowers that Link uses turn into Big Bombs, which have an increased blast radius and inflict double damage. Bombs have a blast radius that reaches one level above or below, while Big Bombs reach two levels above or below.

During the Boss battle in Bomb Storage, Li'l Hinox throws an even larger Big Bomb at the Link. This Bomb bears a Hinox marking and has triple the blast radius and damage output of a regular Bomb. It is too heavy for any of the Link to lift and will only move a short distance when blown with the Gust Jar, but with precise timing it can be fired back at Li'l Hinox to damage him.