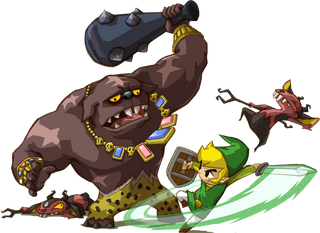 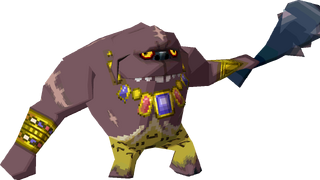 Big Blins are a branch of large and tough Moblins.[1]

In Spirit Tracks, Big Blins can take a lot of punishment, and are capable of dealing massive amounts of damage to Link. Their swings can send Link flying a great distance, and knock him dizzy. To defeat them, Link must take advantage of their slow reaction speed by darting in, attacking, and running away before the designated Big Blin swings its club. If a Big Blin traps one of Link's passengers, it will send him to the Pirate Hideout; but if Link has not unlocked the tracks to the Pirate Hideout yet, it will be game over.

Their long club swings can injure and kill their own, for example, when Big Blin destroys his minion Miniblins on the Spirit Train in the Ocean Realm. Another example is in the Take 'Em All On gauntlet, when Link fights three Big Blins, and they injure one another with their wide swings and backswings.

In Hyrule Warriors Legends, Big Blins appear as Captains, often in the ranks of the Dark Forces. In "A New Disturbance", Big Blins are attacking Windfall Island. When Link and Tetra repel their advance, morale boosted Big Blins known as Ruffians begin advancing towards Windfall Island and appear as reinforcements in the Forsaken Fortress keeps until the keeps are captured. The Big Blins also drive off the Helmaroc King to take over the Forsaken Fortress. They also appear in Gerudo Desert, manning the Gate of Souls on orders from the Aeralfos for the Monster Forces in The Search for Cia until they are defeated. If they are hit with the Hammer during their charge up attack, they throw a tantrum damaging their allies thus exposing their Weak Point Gauge from Extra-Effective Item Attacks.

When defeated, Big Blins may drop Big Blin Hides or Big Blin Clubs as their Bronze and Silver Materials, respectively.