Not to be confused with Big Deku Babas, larger versions of regular Deku Babas that appear in Ocarina of Time. 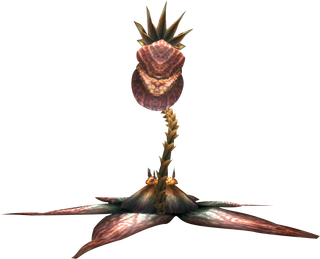 Forest Temple
City in the Sky

Sword
Bomb
Bombling
Big Babas are enemies in Twilight Princess.[1] They are monstrous, giant relatives of the Deku Baba and Deku Like. They consist of a huge, weighty head on a giant thorny stem attached to a large bud. The bud in the center is actually the main body of the creature, while the stem and head reach out to attack intruders and drop items into the bud to be swallowed.

Link first encounters a Big Baba in the Forest Temple, where it appears in a room with a trapped Monkey. The key to the Monkey's cage lies out in the open, until the Big Baba grabs it in its jaws and drops it inside the bud, away from Link. Link must fight the Big Baba and destroy the head to cause the bud to open up. The head attacks by lunging at Link with biting attacks and attempting to crush him by slamming from above. Link must strike the head with his sword until it is destroyed, at which point the bud can be destroyed by throwing a Bombling into it, much like a standard Deku Like.

Another Big Baba appears in the City in the Sky. This time it appears on a small platform flanked by a number of Baba Serpents. It can be defeated in the same manner as the one in the Forest Temple, but must be finished off with Link's own supply of Bombs.