This is an article about the Twilight Princess character. For one of the four Poe sisters from Ocarina of Time and Majora's Mask, see Beth (Poe) 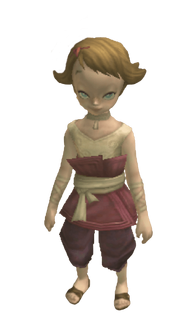 The Era of Twilight

Beth is a character in Twilight Princess.[2]

Beth is a young girl from Ordon Village who is the daughter of Hanch and Sera. She seems to have a crush on Link, admiring him for all the important things he does while still having time to relax.[3] She always hangs out with Talo and Malo, but thinks that they are both immature and calls them brats and idiots.[4] As such, she is often scolding them for asking things of Link, only to see her asking Link the same question, claiming that it is only because they will not leave him alone.[5] Before Link departs to Hyrule Castle, Beth mentions to him that she would also like to go since there is nothing in Ordon Village that looks good on her.[6] She also complains that she will not help at her mom's store until her dad stops buying inventory for boys and starts bringing in more girly stuff.[7]

Beth, along with the rest of the Ordon children, are eventually kidnapped by King Bulblin and his minions. When Link travels to Kakariko Village, he finds Beth and the rest of the children taking refuge from the Shadow Beasts under the care of Renado, the shaman of the village. Beth bursts into tears as Barnes explains the deadly fate that could befall them,[8] but Colin is fast and tries to cheer her up by saying that Link will come and save them all.[9]

Later on, after Kakariko Village is freed from the Twilight, King Bulblin comes again and tries to run over Beth and Talo. However, Beth is pushed out of harm's way by Colin, who is in turn kidnapped. Once Colin is rescued by Link, Beth stops teasing the young boy and starts taking care of him in order to help him recuperate from his injuries.[10][11] She can be seen along with Luda caring for Colin at the Elde Inn.[12]

Beth also seems to develop some interest in Ralis, and once the Zora leaves, she regrets not having gotten to know him better so that she could have met the Zora Royal Family and possibly become a princess in the process.[13] She also becomes good friends with Luda, Renado's daughter.

Beth and Luda can be seen hugging in the ending credits as Beth departs back to Ordon.