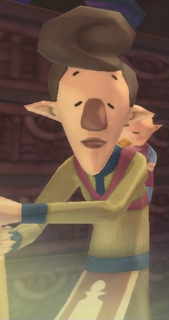 Bertie is a character in Skyward Sword.[2]

Bertie is a timid, overworked father who works alongside his wife, Luv, by infusing the Potions bought at her Potion Shop in his Infusion Shop in exchange for Bugs and Rupees.[3] He also cares for their young child, who he carries on his back.

Later in the game, Bertie is found to be tired and restless at his job. When spoken to at his house during the night, he will reveal that his child's Rattle had been taken by a bird some time ago, causing her to be unable to sleep and thus preventing him from sleeping as well.[4] Link locates the Rattle in Skyloft lying in a nest atop a house. Returning the Rattle to Bertie will reward Link with 5 Gratitude Crystals, ending Bertie's sleepless nights.[5]

Bertie's name, and that of his wife Luv, is derived from lovebird, a small species of parrot.